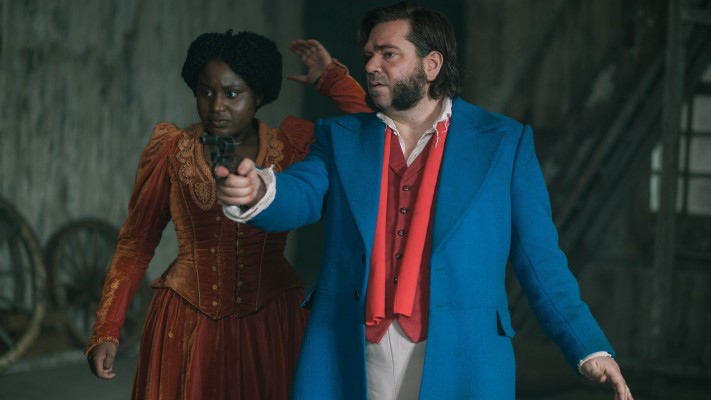 MATT BERRY TAKES ANOTHER TRIP DOWN THE RABBIT HOLE

IFC and UK’s Channel 4 are returning to Victorian London for a second outing of Year of the Rabbit. The six-episode second season, written by Emmy(R) and WGA Award winners Andy Riley and Kevin Cecil (Veep, Black Books) and co-written by and starring Matt Berry (Toast of London, What We Do In The Shadows), will once again focus on tough booze-hound Detective Inspector Rabbit (Berry), his hapless partner Strauss (Freddie Fox) and the country’s first female police officer Mabel (Susan Wokoma) as they fight crime in London’s east end. The renewal news comes just days before Year of the Rabbit premieres Wednesday, February 19th at 10:30pm ET/PT on IFC.

Matt Berry commented, “I’m looking forward to Inspector Rabbit returning back to our screens to fight crime in the past. This time he’ll deal with all sorts of unearthly forces, including the Royal Family! Victorian London is presently very much where it’s at.”

IFC and SundanceTV Executive Director Blake Callaway added, “Ever since he guest starred on Portlandia, we knew we wanted more Matt Berry on IFC. An often-drunk, frequently filthy, and always foul-mouthed Victorian detective hits the perfect ‘slightly off’ spot.”

Fiona McDermott, Head of Comedy at Channel 4, says, “Year of the Rabbit is one of the most glorious, gutsy and audacious comedies on TV, made by a fantastic cast and crew who relish every detail. We’re thrilled to welcome it back. Here’s to more absurd capers in the dark underbelly of Victorian London.”

Year of the Rabbit premiered in the UK to rave reviews, including: “The unexpected comedy delight of 2019” (The Guardian); “The best new comedy of 2019” (Daily Mirror); “A rare bit of hot comedy on toast” (Independent); and “One of the funniest new comedies I’ve seen” (Daily Express).

Year of the Rabbit, co-produced by IFC, is directed by BAFTA-nominated Ben Taylor (Catastrophe) and written by Emmy(R) and WGA Award winners Andy Riley and Kevin Cecil (Veep), with additional material from Matt Berry. Ben Farrell and Toby Stevens will executive produce for Objective Fiction, with Hannah Mackay producing.

The six-episode first season of Year of the Rabbit premieres Wednesday, February 19 at 10:30pm ET/PT only on IFC.

Year of the Rabbit - Episode Descriptions

Episode 1: "Pilot" - D.I. Rabbit's been chasing Victorian London's criminals for as long as he can remember. But he's not as young as he was, and his heart keeps stopping, so he's forced to investigate the murder of a cabaret girl, along with his two new young partners, Mabel and Strauss.

Episode 2: "Brick Man" - A new killer stalks the streets of London, disguised as the Brick Man, a terrifying figure from urban folklore. Rabbit and his team have to find the murderer before the city is engulfed by panic and riots.

Episode 3: "Gangs" - Rabbit's team has to go undercover in warring youth gangs, but Rabbit's too old for that, so he investigates mysterious deaths at an old people's home... which turns out to be just as dangerous.

Episode 4: "Sniper" - As a mystery sniper kills in London, Rabbit must protect a visiting Prince of Bulgaria, all while dealing with the Prince's sister and an old flame who might be the murderer.

Episode 5: "Hostage" - When a seemingly mad poisoner takes a group of young women hostage and threatens to release deadly gas, Rabbit must handle the crisis before the female con he loves is executed for her crimes.

Episode 6: "Framed Rabbit" - Things are not looking good for Rabbit - he's either been framed for murder, or committed a murder. Whichever way, he's on the run, but Strauss and Mabel refuse to believe he's guilty.

Year of the Rabbit