A DJ disappeared in Ibiza about 20 years ago. His sister now wants to investigates the mysterious death. White Lines inter-mixes story lines between England and Spain, at different time periods, in an explosive new thriller on Netflix.

Season 2 of White Lines is cancelled by Netflix

In a surprising move by Netflix, the TV series White Lines will end after the first and only season. Our TVscorecards renewal score was 71%, which put it at “high chances” of getting renewed (Our data analyst at TVscorecards.com keeps track of many data points to calculate renewal chances of a TV show, encapsulated in a “TVScorecards Renewal Score”).

We estimate that over 5 million viewers* have watched the first season, with momentum remaining steady through the episodes, as shown by the TVscorecards popularity score below. While the trend was slightly downwards over the first 10 episodes of season 1, it is often the case for TV series as users drop off. The trend for White Lines remained relatively steady, a good indicator that the series kept its momentum. 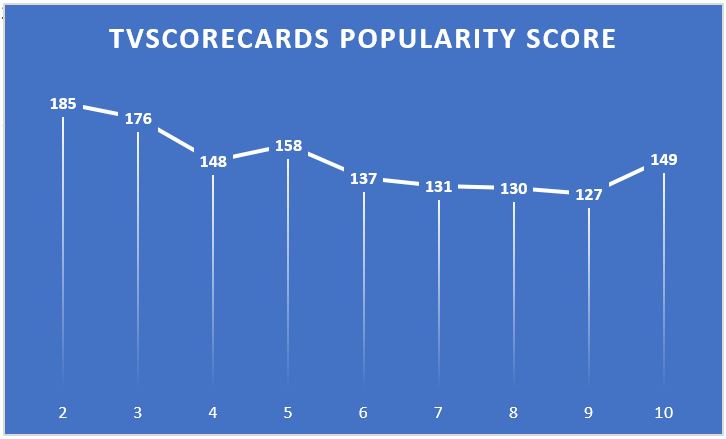 The Plot still left a lot of room for season 2. According to Deadline, Netflix series was written with a three-season arc in mind. TV series that are originally intended to be more than one season have higher chances of getting renewed. Additionally, the cliffhangers in the first season set White Lines up for season 2. However, while there was a lot of room for the plot to continue, season one also revealed the biggest secret: viewers found out who Axel’s killer is. Daniel Mays stated “you found out who killed Axel, so it works as a limited series”.

There were indications among the cast that season 2 was a strong possibility and getting worked on. Actor Angela Griffin initially told NME that “There’s still life in this show yet”, and Harries, who plays DJ Axel Collins, told LADBible that “I know that there are recces happening for season two; they’re location scouting, if and when that goes ahead – or that was happening prior to the global pandemic”. Daniel Mays told Digital Spy that White lines is “brilliantly left open, especially for Marcus, my character. I think the last scene is him wanting to take over the drug operation from the Calafat family. There’s many, many loose ends that need to be tied up. I think there’s definitely potential for the younger actors to still come back (…) There are lost flashbacks that we haven’t addressed yet.”

One important call out is that White Lines is produced/directed by Alex Pina, who also happens to be the producer for the Netflix blockbuster “Money Heist” (Renewed now for season 5). However, this was not enough and season 2 ultimately got cancelled.

White Lines got cancelled reportedly due to the following key factors

We believe that the following factors drove the cancellations of White Lines season 2:

White Lines is a british TV show by Alex Pina. Zoe Walker leaves her quiet life behind to investigate her brother's disappearance in Ibiza, where she quickly heads down a decadent and dangerous path.

White Lines is awaiting decision to be renewed or cancelled. View status for season