Update 8/17: Netflix has officially announced that Warrior Nun is renewed for season 2.

The announcement has been made through their Instagram account, with the Showrunner Simon Barry jokingly asking the cast “Tell me how you felt when season 2 was officially renewed?” to a team that did not know yet about the renewal.

#WarriorNun is officially renewed for Season 2 by Netflix. #warriornunnetflix

Warrior Nun season 2 is likely coming to Netflix in 2021. Warrior Nun is a fantasy drama TV series based on the comic book “Warrior Nun” by Ben Dunn. The TV series features the story of a 19-year-old woman who wakes up in a morgue with a new life, and a divine artifact embedded in her back. She finds out that she is now part of the Order of the Cruciform Sword that fights demons on earth.

Will there be a Warrior Nun season 2?

Netflix has NOT yet renewed Warrior Nun season 2. However, we believe there is an 81% chance that there will be a season 2.

Warrior Nun has not been officially blessed for a new season 2, but our algorithm shows that there are high chances that it will be. Our data analysts track several popularity indicators and compute a “TVscorecards.com Renewal score” based on this analysis. Cursed has a 81% renewal score. 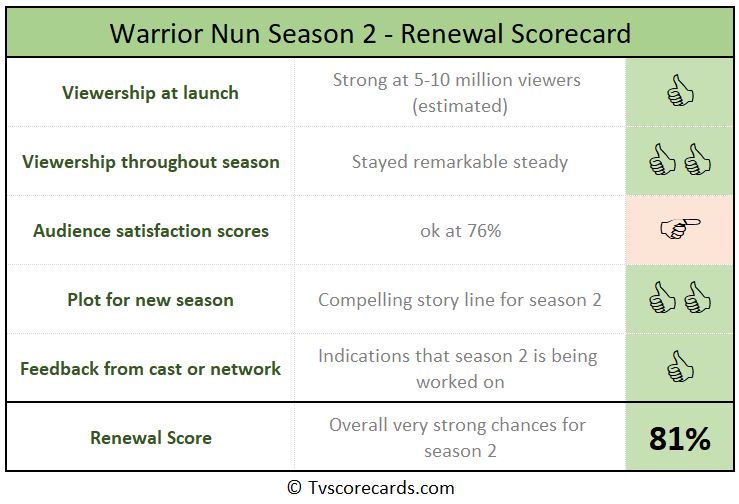 There are several reasons that lead us to think Netflix will approve season 2:

2. The plot opens the door for a season 2. An important consideration in a TV series renewal is the potential for a compelling season 2 storyline. With Warrior Nun, the finale of the first season ends with a cliffhanger: halo-bearer Ava meets angel Adriel who has been trapped for centuries underneath the Vatican catacombs. Ava’s Warrior Nun friends set him free, but he turns out to be a devil. Father Vincent was working to liberate Adriel since the beginning. As a result of his newfound freedom, Adriel calls on demons, and the pack engulfs Ava and the sisters. At the end of the finale, we don’t even know if the Warrior Nun team makes it alive.

3. Viewer scores are high. The show scored well on viewer satisfaction, as expected, with a 76% TVscorecards score. While this doesn’t quite place it as a top-rated shows of 2020, it is still a high score that shows the series has been well received by viewers, a positive factor as well that contributed to our prediction that Warrior Nun will be renewed for season 2 soon.

4. The producter/showrunner keeps talking about the potential for a Warrior Nun season 2 storyline. Another important consideration to find out if a show is going to be renewed is the sentiment of the cast. We scan interviews to find hints that there are positive vibes for a second season. For Warrior Run, we’ve learned that producer/showrunning Simon Barry told Den of Geek that “We’ve thrown a lot of ideas around about where the show could go at the end of the season, of what we want to do next season (…) I know that season two, if we’re lucky to get one, could redefine the show in ways that might change that.” (See article). Simon Barry also gave an interview with INVERSE, stating “Anything between five and seven seasons would be lovely”. Inverse reported that “Barry tells Inverse he already has plans for Season 2 and beyond if Netflix decides to renew”. In an interview with EW, Barry also stated “Given what’s happened at the end of season one and going into a season two, the stakes have increased exponentially for her and are much less personal. (…) If we get a season two, we need to build on what we did in season one and not reproduce it” and there is “obviously fertile ground for season two” (See EW interview).

When will Netflix announce the official status?

We believe that renewal for Warrior Nun season 2 will happen in the late August/September timeframe, although COVID-19 made it hard to predict when renewal announcements officially take place as the pandemic resulted in significant production delays throughout the spring/summer seasons.

Warrior Nun is the story of a young woman who wakes up in a morgue with a new life and an artifact embedded in her back. She finds out that she is now part of an ancient order that fights demons, and mighty forces representing both heaven and hell want to find and control her.

Warrior Nun is renewed for season 2. View status for season