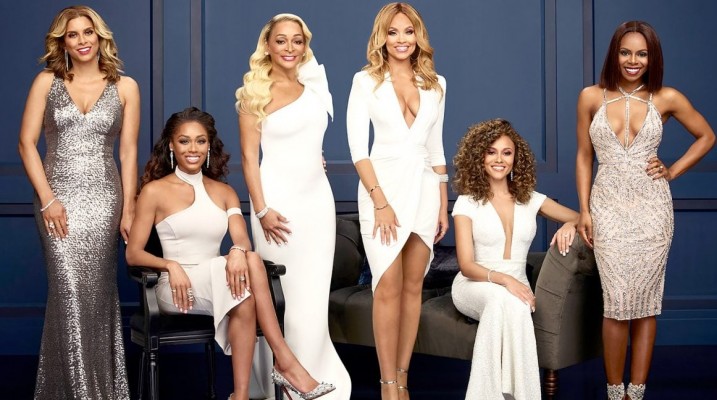 “THE REAL HOUSEWIVES OF POTOMAC” RETURNS WITH SECOND CHANCES AND A WHOLE LOT OF SASS ON SUNDAY, MAY 3, AT 8PM ET/PT

· “The Real Housewives of Potomac” season 5 premieres on Sunday, May 3, at 8pm ET/PT on Bravo

· New housewife Wendy Osefo joins this season with brains and sass, and she’s making sure the ladies put some respect on her name

· Love is in the air as Gizelle Bryant rekindles a relationship with her ex-husband, pastor Jamal Bryant, but her daughters are struggling to accept their new normal, making things challenging for the couple.

· Although Karen Huger and Ray are back in Potomac with a beautiful new home, their 23-year “institution” may be in question when Karen discovers that Ray’s feelings for her might not be the same as they used to be.

· Ashley Darby and Michael are in heavenly bliss with their new baby, Dean. But just when their relationship gets back on track, their newfound happiness is threatened by news of Michael’s wild night on the town.

· Robyn Dixon and Juan have been through hell and back, and after living under one roof with their two sons for six years, Robyn is ready to make things official. Now all she needs is for Juan to make his move or will she make hers first?

· Juggling a house with three kids and a new feathered friend is taking its toll on Monique Samuels. The last thing she needs is drama with Candiace, but when a night with the girls gets out of hand, their friendship takes a turn that impacts all the women.

· Candiace Dillard Bassett and Chris celebrate their first year of marriage and contemplate adding a baby to the equation. Before Candiace can focus on family matters, though, she must deal with her unresolved issues with Ashley and mounting conflicts with Monique.

· Nigerian-American Dr. Wendy Osefo, the newest housewife, is a triple threat as a professor, political analyst, and entrepreneur. She’s been married for nine years and is the mother of three children, including a newborn daughter. Never one to be underestimated, she is full of sass and ready to make her mark in Potomac.

Dr. Wendy Osefo is the essence of a Renaissance woman – professor, political analyst, and entrepreneur. As a Maryland native, Nigerian-born Wendy joins the ladies of “The Real Housewives of Potomac” this season. With her strong personality, she knows how to hold her own and speak her mind when it comes to standing up to the other ladies.

Wendy’s life and upbringing embody the ultimate immigrant journey. Growing up with a single immigrant mother who put herself through college, Wendy learned first-hand the value of hard work and never thought of excuses or failure as options. Now an award-winning Nigerian-American television personality and progressive political analyst, she is on a quest to fulfill her insatiable appetite to succeed and obtain the American dream. Wendy received a Bachelor of Arts from Temple University, a Master of Arts from The Johns Hopkins University, a Master of Science from Rutgers University, and a Doctor of Philosophy (PhD) from Rutgers University, where she made history by becoming the first black woman to earn a PhD in Public Affairs/Community Development.

Wendy is also a philanthropist who has sought to give back by supporting the next generation of leaders as the founder and CEO of the 1954 Equity Project, LLC, which provides tools, mentorship, and resources to underrepresented minorities to help them thrive in higher education. Wendy is currently a professor at the Johns Hopkins University School of Education specializing in urban education and politics. Prior to joining the faculty at The Johns Hopkins University, Wendy served as the Director of Family and Community Engagement for President Barack Obama’s antipoverty initiative, DC Promise Neighborhood Initiative. When she is not busy traveling to exotic destinations or on date nights with her hubby, Wendy loves to cook for her family. Wendy also has a penchant for interior design and hopes to start her own home essentials line in the future.

Wendy has been married for nine years. She and her Nigerian husband, attorney Edward Osefo met as teenagers, were friends for several years before making it official after graduating college, and have been together ever since. They have three beautiful children together, seven-year-old son Karter, five-year-old son Kruz, and the newest addition to the family, newborn daughter Kamrynn.

Just up the river from our nation’s capital lies a hidden gem—Potomac, Maryland. Its rolling hills, gated mansions, sophisticated prep schools, and exclusive country clubs all serve to keep the area invitation-only. Sprinkled throughout this community are a handful of old-line, wealthy African-American families who have historically broken racial barriers to provide a life of privilege for their children. The Real Housewives of Potomac follows the upscale lives of six intriguing, well-to-do women: Gizelle Bryant, Katie Rost, Karen Huger, Charrisse Jackson-Jordan, Robyn Dixon, and Ashley Darby, all of whom have fought for their places in this society by way of legacy or marriage. In a town where entry is granted only through class, pedigree, and lineage, how far will these ladies go to secure their spot at the top of this prestigious circle?