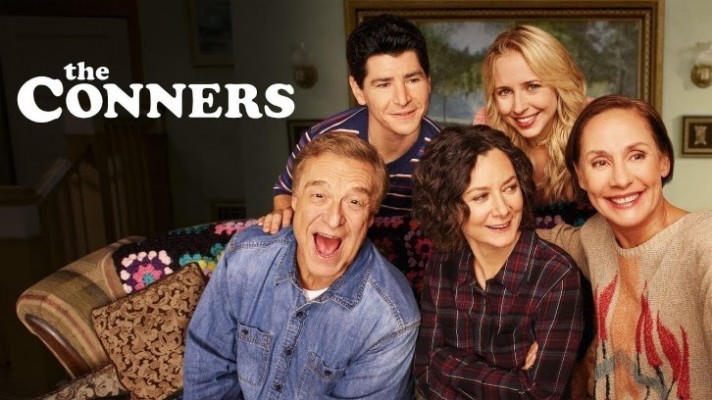 Get ready for more Conners. ABC has quietly renewed the Roseanne spinoff for Season 3, well-placed insiders have exclusively informed TV Scorecards. The Conners Season 3 will premiere in Fall 2020, per insiders.

ABC confirmed their Fall 2020 schedule with The Conners season 3 showing on Wednesday nights at 9:00pm ET just after the season 7 of Black-ish at 8:30pm ET. See our ABC 2020 Fall schedule.

In the new season, we have learned directly from ABC that the season 3 plot will be influenced by the pandemic: the sisters will take new jobs at Wellman Plastics plant, where their late mother and beloved aunt worked over three decades ago. Becky attempts to stay positive despite her her mask and other protective shields, which Darlene says is “easier said than done.”

ABC canceled the highly successul Roseanne TV series in 2018 when Barr compared official Valerie Jarrett to Planet of the Apes on Twitter. The tweet was described by ABC as “repugnant and inconsistent with our values”. As a result of this backlash, ABC revamped the Roseanne show and created a new series with Conner family, but without Roseanne. Some fans of Roseanne remained outraged that The Conners is renewed for season 3, and protested with many comments on TVScorecards.com. One user commented “I have yet to watch a single episode of the Conners. I refuse to. Roseanne was mistreated in the handling of her mishap”.

“The Conners” follows America’s favorite family as they continue to face the daily struggles of life in Lanford. Dan, Jackie, Darlene, Becky and D.J. will continue to grapple with parenthood, dating, financial pressures and aging in working-class America. Through it all – the fights, the coupon cutting, the hand-me-downs, the breakdowns – with love, humor and perseverance, the family prevails. The series stars John Goodman as Dan Conner, Laurie Metcalf as Jackie Harris, Sara Gilbert as Darlene Conner

What do you think: Are you pleased by The Conners Season 3 renewal? Should the show have been cancelled?

"The Conners", a spinoff of the groundbreaking family comedy "Roseanne," has been greenlit to series with an order of 10 episodes for fall 2018. After a sudden turn of events, the Conners are forced to face the daily struggles of life in Lanford in a way they never have before. This iconic family - Dan, Jackie, Darlene, Becky and D.J. - grapples with parenthood, dating, an unexpected pregnancy, financial pressures, aging and in-laws in working-class America. Through it all, the fights, the coupon cutting, the hand-me-downs, the breakdowns - with love, humor and perseverance, the family prevails. The series, featuring John Goodman ("Dan"), Laurie Metcalf ("Jackie"), Sara Gilbert ("Darlene"), Lecy Goranson ("Becky") and Michael Fishman ("D.J.") as their beloved Conner characters, is set to air Tuesdays (8:00-8:30 p.m.). Additional cast members and a premiere date will be announced later. Roseanne Barr will have no financial or creative involvement in the new series.

The ABC Television Network has ordered a second season of freshman hit comedy "The Conners," Karey Burke, president, ABC Entertainment, announced today. Ranking as television's No. 1 new comedy this season in Total Viewers (9.5 million) and Adults 18-49 (2.2/10), the self-starting ABC freshman led Tuesday's 8:00 p.m. half-hour in Adults 18-49 by 16% over its nearest competitor. During its first season, "The Conners" improved its time period by 33% in Total Viewers and by 22% in Adults 18-49, posting 5-year highs for ABC in the half-hour.

"We are proud to be continuing the story of the iconic Conners family," said Burke. "This team is fearless in their willingness to tackle contemporary issues with humor and heart, and I have no doubt they will continue to outdo themselves."

In "The Conners," this iconic family grapples with parenthood, divorce, dating, aging and financial pressures in working-class America. Through it all - the fights, the coupon cutting, the hand-me-downs, the breakdowns - with love, humor and perseverance, the family prevails. The spinoff has also received critical acclaim with The Daily Beast calling it "warm, hilarious and fun," and The New York Times declaring the new sitcom "special, deserving of a prime-time slot on television every week."