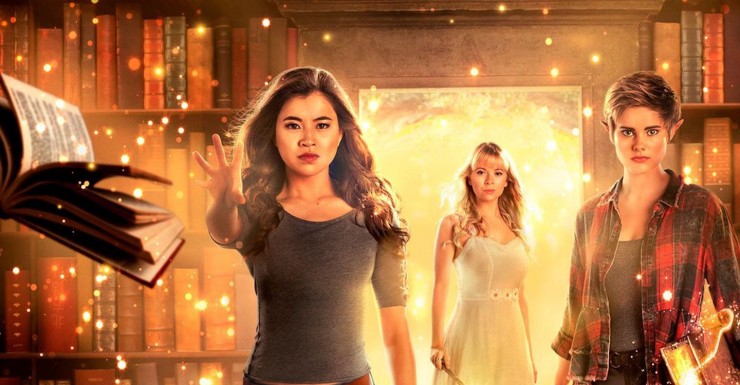 The Bureau of Magical Things is powering up for Season 2.

The hit children’s fantasy series has been renewed for a 20-episode second season, TV Scorecards can reveal.

The Bureau of Magical Things Season 2 production begins this December for a late 2020 premiere on Network Ten in Australia and early 2021 premiere in the US on Nickelodeon, sources inform us.

Are you looking forward to more The Bureau of Magical Things? Should the show have been cancelled?

When ordinary teenager Kyra touches a mysterious book, she is transformed into a Tri-ling--part-human, part-fairy and part-elf. In addition to acquiring amazing magical powers, Kyra discovers a secret world of magic all around her.

Jonathan M. Shiff, the internationally-renowned Queensland producer, returns to the Gold Coast with a second series of the hit children’s television project: The Bureau of Magical Things with major production investment from ZDF Enterprises, Screen Queensland and Screen Australia.

The Bureau of Magical Things Season 2 continues the adventures of Kyra, a teenage girl who acquired magical powers when caught in a clash between an elf and a fairy. In this new series, when Kyra and Darra embark on a quest to find a legendary lost temple, Kyra’s orb magic accidentally awakens a dangerous object causing fairy and elf magic to malfunction. As the danger escalates, Kyra must risk everything to deal with a threat that endangers the entire magical world and brings her own identity into question.

Production will be from December 2019 to July 2020 with the original Queensland cast to return for the 20-part series led by Brisbane actress Kimie Tsukakoshi (The Family Law) as Kyra. Elizabeth Cullen and Julian Cullen (Danger Close: The Battle of Long Tan), brother and sister off screen, return as elf brother and sister on screen. Mia Milnes and Rainbow Wedell (Jiva) from the Gold Coast headline as fairies. Jamie Carter, also from the Gold Coast, plays Kyra’s human friend and now a member of ‘The Bureau’, while Arnijka Larcombe-Weate again plays Kyra’s problematic bestie oblivious to the magical world.

Producer, Jonathan M. Shiff said: “Australian children, like children all around the world, love fantasy, mystery and adventure. It’s wonderful to build on the success of the first series with a story more magical and more epic as our young heroes seek answers to their mystery not only in Australia but across South East Asia. The extraordinarily talented Queensland cast and crew, plus the stunning local locations continue to help us to achieve the highest quality production values for a global audience.”

Fred Burksen, President and CEO, ZDF Enterprises, said: “We have been working with Jonathan and his team for so many years, we consider them family. Side by side, we have managed to put smiles on the faces of children in almost every country on Earth. We are delighted that our extremely successful partnership with Jonathan M. Shiff Productions will now be continued with the second season of The Bureau of Magical Things.”

The Bureau of Magical Things Season 2 is a Jonathan M. Shiff Productions project for Network 10, ZDF and Nickelodeon. Major production investment from ZDF Enterprises, Screen Queensland and Screen Australia. It is presold to Network Ten Australia, German public broadcaster ZDF and Nickelodeon, and is distributed worldwide by ZDF Enterprises. The series is supported by City of Gold Coast Film Attraction Program.

The Bureau of Magical Things