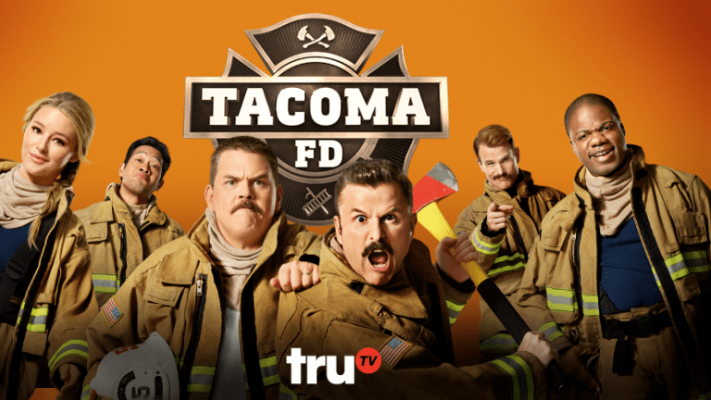 truTV is expanding the world of Tacoma FD with an unscripted after show, Tacoma FD: Talkoma FD, to air directly after each episode of the scripted comedy. Talkoma FD debuts tonight, Thursday, March 26 at 10:30p.m. ET/PT, directly following the season two premiere of Tacoma FD.

“Because of social distancing we were really missing each other,” said Heffernan and Lemme. “We found a way to keep in touch without having to admit our true feelings.”

Each week, Tacoma FD co-creators and stars Steve Lemme and Kevin Hefferan will take viewers behind the scenes with cast interviews and bonus footage. Heffernan, Lemme, and the crew will all be producing and filming remotely from their own homes, with guests joining via video. In the series’ first episode, the guys put the Q&A in quarantine by interviewing series regular Hassie Harrison and visual effects supervisor Jason Piccioni, and also reveal a sneak peek at the upcoming season of Tacoma FD. Upcoming guests include series regulars Eugene Cordero, Marcus Henderson, and Gabriel Hogan, as well as series writer and guest star Paul Soter (Super Troopers 2), with more to come.

Los Angeles, June 18, 2019 - Fresh off of its blazing-hot first season, WarnerMedia's truTV announced today the second season order for Tacoma FD, the scripted comedy series from co-creators and stars Kevin Heffernan and Steve Lemme of the Super Troopers movie franchise. Tacoma FD launched as the #1 new cable comedy among young adults when it premiered earlier this year and finishes among cable's top 5 scripted comedies. The 13-episode second season order will go in to pre-production later this year and is slated for release in 2020.

Tacoma FD is a half-hour comedy set in a firehouse in one of America's rainiest cities. Light on blazes that need extinguishing, these firefighters keep themselves entertained with creative competitions, friendly first responder rivalries and no shortage of bizarre emergency calls. Chief Terry McConky (Heffernan) and Captain Eddie Penisi (Lemme) lead the firehouse shenanigans and are joined by an eclectic crew played by Eugene Cordero (Andy), Marcus Henderson (Granny), Gabriel Hogan (Ike) and Hassie Harrison (Lucy).

Dubbed "one of the year's best comedies" (Den of Geek) and with a 96% fresh audience score on Rotten Tomatoes, Tacoma FD quickly resonated with fans due to its affable ensemble cast and signature sense of humor that has cultivated a massive, passionate fan base - one that has reliably followed Heffernan and Lemme from movies to cable.

After hearing about the season two pick up, Lemme and Heffernan said, "While we realize this should be a time for rejoicing, our first thought is: 'Damn, guess we gotta grow those mustaches back.'"

Tacoma FD is executive produced by Heffernan and Lemme alongside David Miner and Greg Walter from 3 Arts Entertainment and Kyle Clark from Silverscreen Pictures.

All 10 episodes from the first season of Tacoma FD are currently available for viewing on the truTV app, VOD and truTV.com.