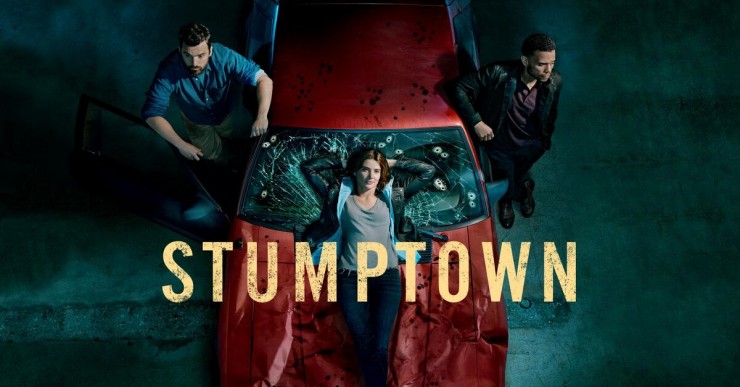 Stumptown is now cancelled by ABC. The network had announced a renewal back in May (See article below) but Stumptown was subsequently cancelled on Sept 15th 2020 due to COVID delays in production.

The delays meant that the show would not make it to the Fall season line up as originally planned.

The producer is reportedly shopping season 2 to other networks, as it is likely that a large part of the production costs have already been invested. We will update this page when a new network picks up the show for a new season.

“Stumptown” gets renewed for season 2

Amidst the production shutdown caused by coronavirus pandemic, the fate of many shows hang in balance. However, good news for the comic book-based “Stumptown” fandom came in as ABC announced the renewal of the show for season 2. Stumptown is an acronym for the city of Portland. Cobie Smulders plays the role of an army veteran who is attempting to become a private investigator.

Stumptown will be shown on Wednesdays at 10pm ET

Stumptown season 2 will be shown on Wednesday at 10pm ET on ABC after American Housewife (9:30pm ET). The new season will start in Fall 2020, and we will update this page as we confirm the exact release date.

What will happen in Season 2?

The last episode and season finale “All Hands on Dex” shows Dex tracking down Benny’s killer, and understanding how she was involved in her death. The Stumptown finale revealed enough new facts to allow Dex some peace, but didn’t completely close the door on her past. In an interview, Cobie Smulder said “It ends in a very violent way that’s probably going to affect her in a new and different way.” After solving the mystery around the death of Benny in the first season, the finale set up a new plot in its final minutes: the arrival of Dex’s long-disappeared mother. Dex’s search for her parents and attempt to reconnect with them has been one of the key story lines across season 1. However, the mom actually is not shown in the last episodes and it is fair to think that she will be central to Stumptown’s season 2 main story line.

Cobie mentioned “It’s always been a fascinating and emotional storyline, not just in asking what exactly happened to them, but in the harshness, really, of what these parents did to abandon their son and leave them in the care of one of their other children”. She added “It’s one of the causes of Dex’s bitterness. She’s just pissed off a lot of the time”.

“Stumptown” is based on the series of graphic novels by the same name and stars Cobie Smulders as the leading lady. The story is set in the city of Portland and follows a tough and astute Army Veteran, Dex Parios whose personal life is as complicated as it gets. From love problems to gambling habits, Dex finds herself in the most impossible situations. Her phenomenal military intelligence skills and sharp personality, however, help her to navigate criminal cases like no other.

Cobie Smulders also has to her credits the famous comedy TV show “How I Met Your Mother”. You might also remember her as Maria Hill, the former deputy director of S.H.I.E.L.D in Avengers.

Stumptown is now cancelled by ABC with no season 2. The network had announced a renewal back in May but Stumptown was subsequently cancelled on Sept 15th 2020 due to COVID delays in production.

Based on the “Stumptown” graphic novel series, “Stumptown” follows Dex Parios (Cobie Smulders) – a strong, assertive and sharp-witted army veteran with a complicated love life, gambling debt and a brother to take care of in Portland, Oregon. Her military intelligence skills make her a great PI, but her unapologetic style puts her in the firing line of hardcore criminals and not quite in alliance with the police.

Stumptown Has Been cancelled With No Season 2