Home | Shows | Year of the Rabbit 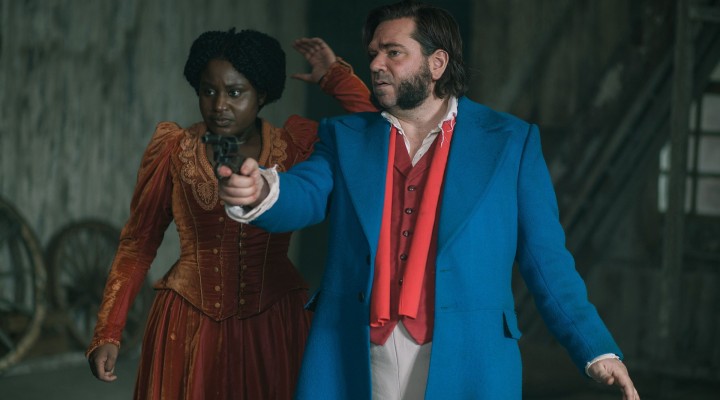 Year of the Rabbit Series Information:

Year of the Rabbit, co-produced by IFC, is directed by BAFTA-nominated Ben Taylor (Catastrophe) and written by Emmy(R) and WGA Award winners Andy Riley and Kevin Cecil (Veep), with additional material from Matt Berry. Ben Farrell and Toby Stevens will executive produce for Objective Fiction, with Hannah Mackay producing.

The six-episode first season of Year of the Rabbit premieres Wednesday, February 19 at 10:30pm ET/PT only on IFC.

Year of the Rabbit - Episode Descriptions

Episode 1: "Pilot" - D.I. Rabbit's been chasing Victorian London's criminals for as long as he can remember. But he's not as young as he was, and his heart keeps stopping, so he's forced to investigate the murder of a cabaret girl, along with his two new young partners, Mabel and Strauss.

Episode 2: "Brick Man" - A new killer stalks the streets of London, disguised as the Brick Man, a terrifying figure from urban folklore. Rabbit and his team have to find the murderer before the city is engulfed by panic and riots.

Episode 3: "Gangs" - Rabbit's team has to go undercover in warring youth gangs, but Rabbit's too old for that, so he investigates mysterious deaths at an old people's home... which turns out to be just as dangerous.

Episode 4: "Sniper" - As a mystery sniper kills in London, Rabbit must protect a visiting Prince of Bulgaria, all while dealing with the Prince's sister and an old flame who might be the murderer.

Episode 5: "Hostage" - When a seemingly mad poisoner takes a group of young women hostage and threatens to release deadly gas, Rabbit must handle the crisis before the female con he loves is executed for her crimes.

Episode 6: "Framed Rabbit" - Things are not looking good for Rabbit - he's either been framed for murder, or committed a murder. Whichever way, he's on the run, but Strauss and Mabel refuse to believe he's guilty.