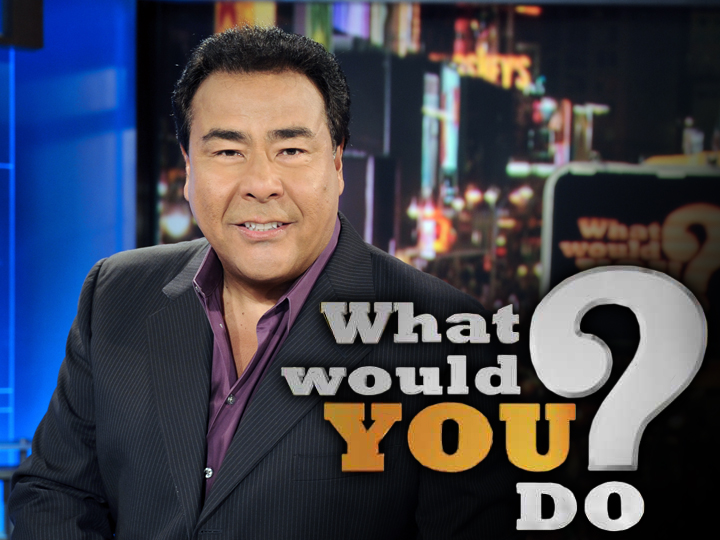 What Would You Do? Series Information:

ABC NEWS ANNOUNCES NEW SEASON OF "WHAT WOULD YOU DO?" WITH ANCHOR JOHN QUIÑONES

The season premiere of "What Would You Do?" with anchor John Quiñones features celebrity guest Nyle DiMarco, "Dancing with the Stars" and "America's Next Top Model" winner, on deaf discrimination and a scenario filmed in El Paso, Texas, near the Mexico-United States border, in light of the current crisis at the border. The new season of "What Would You Do?" premieres Friday, Aug. 9 (9:00 - 10:00 p.m. EDT), on ABC.

"What Would You Do?" reveals how people behave when they think no one is watching, by using hidden cameras to record real reactions to thought-provoking scenarios created by actors. Quiñones has reported extensively for all ABC News programs and platforms, and served as anchor of "Primetime" during his over 35-year tenure at ABC News. He has been recognized for his excellence in journalism including receiving seven Emmy(R) Awards.

· A deaf person is discriminated against while trying to order food in a restaurant. Will other diners stand up to the bully? DiMarco joins behind the scenes to watch the action. He reflects on the scenario which resembles his own experiences living as a deaf man.

· A woman is at a restaurant by the Mexico-United States border in El Paso, Texas, with a young immigrant child, whom she is sponsoring in an effort to keep the child out of a detention facility. Another diner implies that the woman's efforts should be focused on American children who need help. How will bystanders react?

· A mother is at lunch with her hungry children near the border of Louisiana and Mississippi, the two states with the highest percentage of people living below the poverty line, where the level of food insecurity is staggering. The mother can only afford to split one meal between the three of them. Will other diners come to her aid?

· A supermarket bagger lacks basic grocery-packing skills. How will shoppers react when their bread is squished, chips are sampled and eggs are stacked below canned goods?

Ethan Nelson is the executive producer of "What Would You Do?" for Lincoln Square Productions.