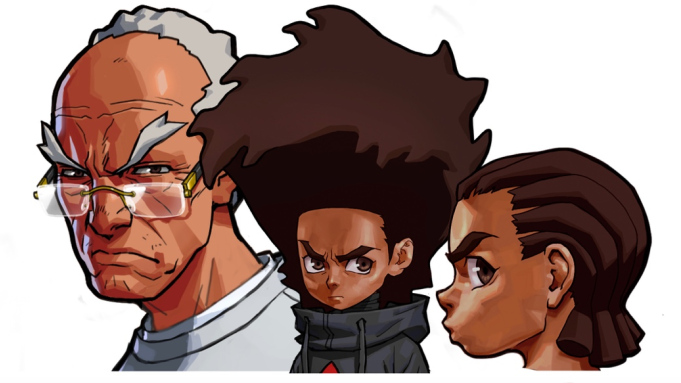 "The Boondocks" to Return on HBO Max

Two Reimagined Seasons, A 50-Minute Special and the Complete Original Boondocks Library Will be Available on HBO Max

HBO Max is ordering two reimagined seasons, with 24 episodes of the beloved animated series The Boondocks. The series from creator Aaron McGruder will launch in Fall 2020 with a 50-minute special. All 55 episodes of the original The Boondocks series will also be available on the direct-to-consumer offering at launch.

Based on the comic strip created by McGruder, The Boondocks both depicted and presaged the nation's most roiling cultural issues, earning McGruder a Peabody Award, and the devotion of fans who see him as both the voice, and the Nostradamus of his generation.

"The Boondocks was a revolutionary series that sparked conversations on hot button issues and brought dark subjects into the light with episodes like 'The Trial of Robert Kelly', 'The Fundraiser' and 'The Story of Gangstalicious'," said Kevin Reilly, Chief Content Officer, HBO Max and President, TBS, TNT and truTV. "Aaron is a gifted visionary whose unique style of storytelling is a welcome voice and we are elated The Freemans are making their thugnificent comeback on HBO Max."

The new Boondocks follows the adventures of self-proclaimed "Civil Rights Legend" Robert "Granddad" Freeman, and his two rambunctious grandsons Huey and Riley. The family has recently moved to an idyllic community in suburban Maryland only to see it taken over by the tyrannical Uncle Ruckus and his bizarre neo-fascist regime. Life under Ruckus turns out to be an everyday struggle to survive.

According to McGruder, "There's a unique opportunity to revisit the world of The Boondocks and do it over again for today. It's crazy how different the times we live in are now - both politically and culturally - more than a decade past the original series and two decades past the original newspaper comic. There's a lot to say and it should be fun."

McGruder returns as showrunner and will serve as executive producer along with Norm Aladjem for Mainstay Entertainment as well as Seung Kim and Meghann Collins Robertson. Sony Pictures Animation will produce the series in partnership with Sony Pictures Television.

In The Boondocks, Robert "Granddad" Freeman (John Witherspoon, Friday After Next) is the cantankerous legal guardian of his rambunctious grandkids Huey and Riley (Regina King-Southland and Ray) and has moved them from the south side of Chicago to the quiet and safety of "The Boondocks" (in this case, suburban Woodcrest), hoping that he can ignore them altogether and enjoy the golden years of his life in peace. But Huey, a 10-year-old left wing revolutionary, is determined not to enjoy the affluence of suburbia. This attitude is seconded by his 8-year-old brother, Riley, a proud product of contemporary rap culture. Although they torture each other and provoke the neighborhood, they are no match for Granddad, who is eccentric even by "crazy-ass-old-black-man" standards. Gary Anthony Williams (Boston Legal) as Uncle Ruckus, Gabby Soleil (Johnson Family Vacation) as Jazmine Dubois and Jill Talley (Camp Lazlo) as Sarah Dubois round out the cast, with Cedric Yarbrough (Reno 911!) returning as the voice of fan favorite Colonel H. Stinkmeaner in addition to Tom Dubois.