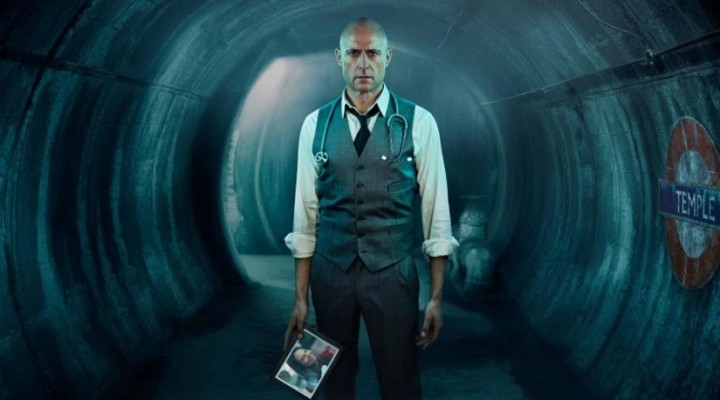 Acclaimed Sky original drama, Temple, starring Mark Strong, Daniel Mays and Carice Van Houten has been recommissioned for a second series on Sky One and NOW TV. The series launched in September with the Observer calling it “quite wonderful” and “hugely rewarding”, whilst the Daily Mirror said it was “a sharp, classy thriller to sink your teeth into” and the i called it “blackly comic, gloriously Gothic and potentially addictive.”

Produced by Hera Pictures, Temple tells the story of Daniel Milton (Mark Strong), a respected surgeon who finds himself drawn into the underground world of doomsday preppers and bank robbers when he tries to save his wife’s life, by setting up an illicit clinic with obsessive yet surprisingly resourceful misfit Lee (Daniel Mays), in the vast network of tunnels beneath Temple tube station in London. They are soon joined by Anna (Carice Van Houten), a guilt-ridden medical researcher whose past is entangled with Daniel’s and fugitive bank-robber Jamie (Tobi King-Bakare). Daniel does his best to juggle this dysfunctional family as his moral boundaries as a husband, friend and doctor are challenged.

In tonight’s final episode, viewers will be left on a tantalising cliff hanger following a climatic showdown as they wait to find out just what happens next to Daniel, Lee, Anna and Jamie.

With filming set for early 2020 they won’t have too long to wait as series two will see us re-join the action a month on from where we last left them, as they are all brought back together when the crimes they have sought to bury begin to resurface. Daniel desperately tries to keep everything under control but with Lee falling for a fanatical uber-Prepper and Anna luring patients down to the clinic for illegal drug trials, life is only going to get more insane.

Mark Strong said: “Daniel Milton is a richly complex character to play and after leaving the audience hanging on a heart stopping finale, I know series two will take viewers on an even wilder ride. The cast and I can’t wait to get started - I am delighted that we have the chance to take Temple to another level with a second series and to work again with the brilliant team at Sky.”

Cameron Roach Sky’s Director of Drama & Sky Studios said: “Temple’s unique tone and compulsive narrative has ensured that it has become a firm favourite with our viewers, and the show already has an army of passionate fans We’re incredibly excited to announce a second season, and to see the next chapter of the thriller evolve. We are delighted that our customers will be able to revel in the world, and performances of the exceptional cast, led so brilliantly by Mark Strong, Danny Mays and Carice van Houten.”

Liza Marshall, Executive Producer, Hera Pictures said: “Series two will be bolder than ever as Daniel is pushed to even greater extremes as he risks everything to stay ahead of his lies and keep a grip on his underground world. Our exceptional cast led by Mark Strong will take the story forward with its unique blend of pressure-cooker intensity, emotion and jet-black humour. Hera Pictures are delighted to bring Temple back for a second series.”

The second series of Temple is the latest in a string of recent commissions as Sky continues to invest in original content. Sky has recently committed to more than double its investment in original drama, comedy and documentary through Sky Studios, the commissioning and production arm of Sky. Sky Studios brings to screen unique stories from the very best talent in Europe and is the creative home of Sky’s award-winning and much-loved Sky originals.

Sky originals current roster includes Catherine The Great starring Helen Mirren; a second series of Jez Butterworth’s Britannia and a second series of Save Me starring Lennie James and Suranne Jones. 2019 has been a record year for Sky originals with 10-time Emmy-winning Chernobyl becoming the most watched original ever with over 4 million viewers of the season finale. And away from the screen, Sky secured a record BAFTA haul with seven awards.

Temple is the story of Daniel Milton, a talented and successful surgeon. Following a personal tragedy that shatters his comfortable life, Daniel partners up with a lonely yet resourceful young man named Lee to start a literal 'underground' clinic, situated in the vast labyrinthine network of tunnels and spaces beneath London. There Daniel treats all those who cannot, or will not, seek more legitimate means of healthcare: criminals, illegal immigrants, and the just plain weird. Of course, such a risky endeavour is not without its surprises, and Daniel and Lee are soon joined in the bunker by Anna, a guilt-ridden medical researcher, and Jamie, a young fugitive bank robber who's in way over his head. And so, down in the bowels of the city, the good doctor must do his best to juggle this misfit team and their needs alongside those of an illegal clinic and its increasingly unpredictable clientele. But Daniel also has another mission, one close to his heart, and as he begins to push his moral boundaries as both a doctor and a man, it becomes worryingly apparent that it may actually be him and his desperate actions that finally bring the whole thing crashing down...Starring: Mark Strong (Shazam!, The Imitation Game), Carice van Houten (Game of Thrones, Valkyrie), Daniel Mays (Rogue One: A Star Wars Story, Line of Duty). Exec Producer: Liza Marshall (Taboo, Riviera). Producer: Barney Reisz (Black Mirror, Elizabeth I). Writer: Mark ORowe (Boy A, Intermission). Directors: Luke Snellin (Wanderlust, Let it Snow), Shariff Korver (Fenix, Infiltrant), Lisa Siwe (Modus, The Bridge).