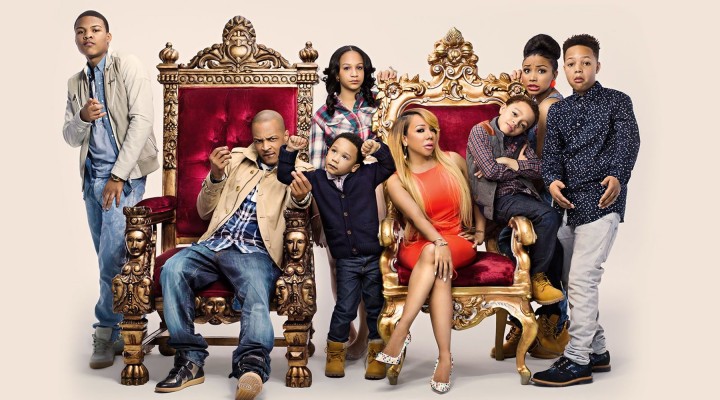 The new season of VH1's hit series "T.I. & Tiny: Friends & Family Hustle" returns on Monday, April 13th at 9PM ET/PT with the most climatic season yet. No strangers to the spotlight, sometimes all eyes (and comments, and likes and retweets) are on them. Through marital troubles, speaking up on social issues and social media backlash, the families always have each other's backs. This season, the cast is faced with public scrutiny and forced to defend themselves in new ways.

Tip "T.I." Harris and Tameka "Tiny" Harris are back with their children Zonnique, Messiah, Domani, Deyjah, King, Major and Heiress this season. As a chart-topping success, an activist, actor and artist, T.I. has made it his mission to diversify himself both professionally and personally. Whether it's giving advice on his podcast, "expediTIously" or rallying the citizens of Atlanta to bring awareness on one of the city's biggest epidemics, human trafficking, T.I. is front and center.

After making a triumphant return to music, Tameka "Tiny" Harris has a case of "empty nest syndrome." With all of the older Harris children having flown the coup, Tiny is focusing on the three youngest Harris'. Walking that ever- so-thin line of "Momager '' and concerned parent, Tiny advises her kids on business while teaching them life is too short not to enjoy it.

As Monica is awaiting the court date to finalize her divorce, the songstress is moving on with her life. She's juggling family life and finishing her highly anticipated new album Chapter 38. She knows her next album must come with the heat to please her adoring fans. Monica is thrown for a loop when her oldest son Rodney has a major health scare that challenges her already hectic life. After all of her hardships Monica will focus on her three children, Rodney, Romelo and Laiyah to make sure they have everything they need as they move into a new home and start a fresh chapter in life.

Over the last couple of years, Toya Wright has been the peacemaker and rock for her family. After everything that she's been through, she has realized that her daughter Reign's father, Robert "Red" Rushing is the man of her dreams. Red has opened Toya up to the idea of getting married again but Toya has some unfinished business she needs to fix before stepping into her next chapter.

Letoya Luckett's new single "Feeling" has garnered a lot of buzz, so much so that record execs have taken notice and want to sign her to a deal. Unfortunately, this comes at a time where she and her husband Tommicus "Tommi" Walker are going through changes in their marriage after the sudden loss of Tommi's mother. With having to juggle baby GiGi, Tommi's grief, her career and talk of a second baby, Letoya can't help but notice that her picture-perfect marriage might be a little out of focus.

Zonnique is working on her first musical project. As sister Deyjah manages a challenge, she leans on Zonnique for support.

Reginae's 20s are off to a roaring start. She is out of her relationship and ready to find a new man. She purchased her first home and landed another pilot to help bolster her growing career.

The series features Grammy(R) Award-winning, multi-platinum artists Tip "T.I." Harris and Tameka "Tiny" Harris along with their children Zonnique, Messiah, Domani, Deyjah, King, Major and Heiress. "T.I. & Tiny: Friends and Family Hustle" will showcase everything from complicated marriages and young love, to health scares and past baggage, to Tip and Tiny working to keep their family together. Much has changed since they left the airwaves more than a year ago with their wildly successful "T.I. & Tiny's Family Hustle." Not only is hip hop's favorite family back and on their grind, but they are bringing Atlanta's biggest stars with them including Monica Brown, Antonia "Toya" Wright with her daughter Reginae Carter, and Letoya Luckett. With exciting lives and high stakes careers, this group of loyal friends will support each other as they navigate the complex terrain of juggling family while building their empires.