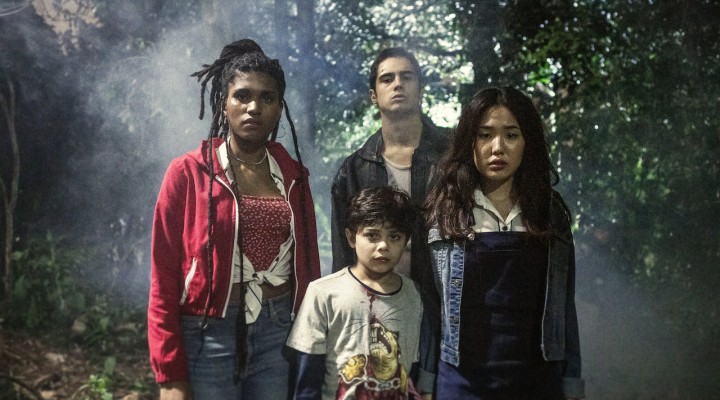 Spectros is NOT cancelled, but there is no official status yet on season 2

Netflix, the world's leading internet entertainment service, announced its new partnership with the showrunner of Marvel's Daredevil and Marvel's The Defenders, the original series Spectros. The acclaimed writer and director Douglas Petrie, whose projects include cult sensation "Buffy - The Vampire Slayer", will partner with renowned Brazilian production company Moonshot Pictures in the upcoming eight-episode series.

In season one of Spectros, the audience will come on board for a supernatural thriller that will unleash the long-buried stories that have been lying for hundreds of years in Liberdade, a neighborhood in São Paulo known by its large Japanese community. The series will revolve around a group of five teenagers inadvertently drawn into an unearthly reality they cannot comprehend and that ties back to the same part of the town in 1908. Once confronted by increasingly bizarre and grim events, the group will reach an unfathomable conclusion: someone is bringing back the dead and those spirits will want vengeance for the mistakes done in the past.

"Spectros is an awesome mash-up of Brazilian folklore and real-life history, mixed with elements of the scariest Japanese ghost stories we could find - all played out on the colorful streets of Liberdade, and seen through the eyes of teenagers. Whew!" said director and screenwriter Doug Petrie.
"Spectros will bring us unique stories deeply rooted in Brazilian culture that touches upon universally appealing themes of love, vengeance, and redemption making it an exciting show for everyone. We are thrilled to bring the Liberdade untold stories to Netflix members around the globe while showcasing the many facets of Latin America's largest city" commented Erik Barmack, Vice President International Originals at Netflix.

Based on the concept developed by Michael Ruman, Anderson Almeida, and Antonio de Freitas, the series has been created and written by Douglas Petrie, who also oversees the scripts as executive producer and who will also direct on the series. The writing also counts with Michael Ruman, Anderson Almeida, Antonio de Freitas, Jananna Tokitaka and Paula Knudsen.

Spectros will be produced by Moonshot Pictures, with Roberto D'Avila and Suraia Lenktaitis as producers. It joins the slate of Netflix Original series produced in Brazil, such as 3%, The Mechanism, Samantha!, Most Beautiful Thing, Sintonia, Nobody's Looking, Super Drags, Invisible Cities, The Faction and The Chosen One.