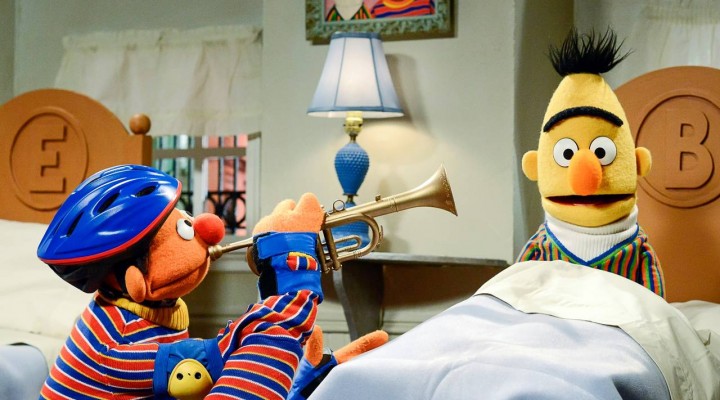 HBO Max solidifies its commitment to kids' and family programming announcing today an expansive partnership with Sesame Workshop, the nonprofit media and educational organization, to bring four new series and five new seasons of Sesame Street, annual specials, as well as its historic 50-year library, to HBO Max, scheduled to launch in spring of 2020. Beginning with season 51, Sesame Street will premiere on HBO Max and then continue to air for free on PBS KIDS. Newly commissioned HBO Max content will also be made available to PBS KIDS after premiering on HBO Max. HBO will continue to air Sesame Street through season 50.

A family-centric live-action take on a late-night talk show, The Not Too Late Show with Elmo - featuring Sesame Street's celebrity friends

A new season of the award-winning animated Esme & Roy, as well as the previous season

Two new animated series, the first a spin-off of Sesame Street called Mecha Builders (working title), featuring favorite Sesame Street characters as heroes in a robot-animation style; and the second series to be announced at a later date

A new docuseries that will explore key issues for kids and families, building off Sesame Workshop's expertise in tackling difficult issues from a child's perspective

A Sesame Street hub will help families and fans access all-things-Sesame on demand, including:

"Sesame Street is, and always has been, the gold standard for children's programming, and we're thrilled that Sesame Workshop chose HBO Max as its new partner," said Robert Greenblatt, Chairman, WarnerMedia Entertainment and Direct-To-Consumer. "This brand is synonymous with quality and integrity, not to mention that nothing is more important than educating young new minds. This landmark deal perfectly illustrates the type of quality programming HBO Max will offer across every demographic."

"The scope of our partnership with Sesame Workshop is unprecedented," said Kevin Reilly, Chief Content Officer, HBO Max, and President, TBS, TNT, and truTV. "The beloved Sesame Street characters and these incredible new shows will be ambassadors for our service and the cornerstone of HBO Max's extensive kids' offering."

"As we celebrate 50 years of Sesame Street and look to the future, we are thrilled to enter into this powerful partnership with HBO Max and their growing offering of best-in-class content," said Steve Youngwood, Sesame Workshop's President of Media and Education and Chief Operating Officer. "Producing this broad slate will help us deliver on our mission to help kids everywhere grow smarter, stronger, and kinder. We are also excited about partnering with WarnerMedia and AT&T as we seek ways to expand Sesame Workshop's impact around the world."

"Sesame Street is the longest-running and most impactful kids' program in television history," said Sandra Dewey, President of Business Operations and Productions, HBO Max, TNT, TBS and truTV. "It is with great anticipation and pleasure that we join Sesame Workshop in carrying that storied legacy forward, both with the continuation of Sesame Street, and also in partnership on a broad spectrum of new content projects and social impact initiatives."

The initial partnership is domestic only; Sesame Workshop and WarnerMedia will explore expanding globally as HBO Max grows. In addition, the two organizations will look for ways to expand the reach of Sesame Workshop's social impact content as well as developing and distributing interactive educational experiences. Sesame Street will continue to be available to every child in America for free on PBS KIDS.

Season 50 of SESAME STREET also features "Big Bird's Road Trip," a special segment that tours the United States and beyond to find out what kids love about their communities. In each installment, Big Bird meets a new friend and video chats Elmo back on Sesame Street, sharing what's special about their families, interests and neighborhoods.

This season, the iconic children's curriculum focus "Oops and Aha!: Embracing the Power of Possibilities" addresses a pervasive issue facing young children. Today's preschool kids are under an unprecedented amount of stress and pressure to meet certain academic and social-emotional benchmarks, often before they're developmentally ready. That result-oriented mindset can make kids afraid to take even the safest risks, like coloring outside the lines or asking "silly" questions.

Individual episodes throughout the season show how caring adults can help relieve that pressure by giving kids room to make mistakes and tools to persevere afterwards. In one episode, for example, Abby Cadabby's brother Rudy feels upset when he "ruins" a drawing; Alan encourages him to keep trying, and Rudy eventually creates a new picture inspired by his mistake.