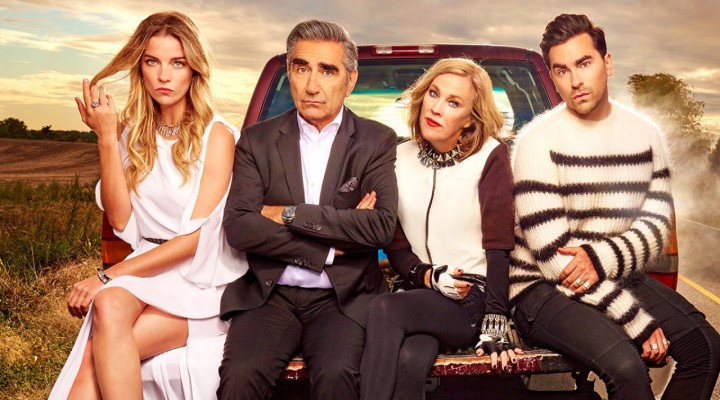 The Rose family’s dreams of escaping Schitt’s Creek are suddenly thwarted when the town’s potential buyer succumbs to a diabetic coma. It’s now clear that their stay in this simple setting will be much longer than they ever imagined. Faced with this horrific truth, the Roses must do the only thing they can: change the town from within.

Johnny embarks on a mission to create a business venture that can surpass the success he found with Rose Video. He starts by looking for appropriate working quarters, but sadly the options are slim, and he finds himself relegated to working in the local mechanic’s garage. But Johnny will do whatever it takes in his pursuit of a profitable idea, even if that means crossing the line into the world of illegal raw milk. No matter what, Johnny will find a way to give his family a better life… it just might include staying in Schitt’s Creek for the time being.

Moira reenters the world of entertainment when she becomes the newest member of Jocelyn’s a cappella group, The Jazzagals. But her local pride doesn’t stop there and she soon finds herself joining the race for Town Council. The road to public office won’t be an easy one, as she faces off against the mayor’s wife, Jocelyn Schitt. Even though it’s small town politics, the two are not afraid to have a big-style battle. For Moira, her new mission isn’t about lowering herself, it’s about raising the standards of the town.

David’s fling with Stevie has come to an end and the two attempt to be friends-without-benefits. David also finally lands a job when he starts working at Blouse Barn. What’s more surprising is that he actually manages to transform the discount dress store into something that reflects his finer tastes. His newfound financial success allows him to become the family breadwinner, a responsibility he doesn’t fully enjoy, though he embraces the sense of independence that comes with it.

Alexis finds herself torn between two men: Ted, who proposed to her, and the ever-seductive Mutt. Ultimately, Alexis discovers that what she truly needs may be interests outside of romantic relationships. But introspection isn’t something that comes naturally to the former party girl, and becoming a self-reliant woman is easier said than done. Alexis plans on helping her family financially, which may require her, like the rest of the family, to step well outside her comfort zone.