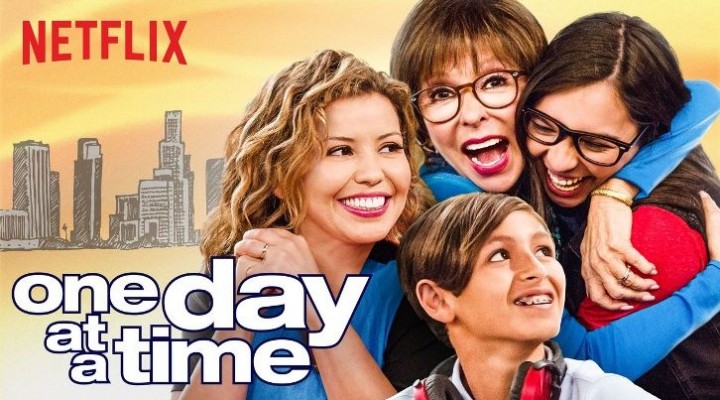 "One Day at a Time" Producer Gloria Calderón Kellett has confirmed that the series has been canceled and there will not be a season 5. The producing company, Sony Pictures, planned to shop the series to other networks, but the producter later announced on 12/9/2020 that a new home could not be found for the series following the cancellation.

ONE DAY AT A TIME, the comedy-drama inspired by Norman Lear's 1975 series of the same name, follows the life of Penelope Alvarez (Screen Actors Guild Award® winner Justina Machado), a newly single Army veteran, and her Cuban-American family, as they navigate the ups and downs of life. Now a nurse practitioner, Penelope is raising two strong-willed children. When faced with challenges, Penelope turns to her "old-school" mother Lydia (Emmy®, Grammy®, Oscar® and Tony® winner Rita Moreno), and her building manager Schneider (Todd Grinnell), who has become an invaluable confidant. The series offers a contemporary take on what life looks like in both good and bad times, and how loved ones can help make it all worthwhile. The series also stars Isabella Gomez as Elena Alvarez, Marcel Ruiz as Alex Alvarez and Stephen Tobolowsky as Dr. Berkowitz.

“How amazing it is to be involved with this brilliant and culturally significant series that deals with important themes one minute while making you laugh the next,” said Brad Schwartz, Pop TV President. “If Schitt’s Creek has taught us anything, it’s that love and kindness always wins. Pop is now the home to two of the most critically praised and fan-adored comedies in all of television, bringing even more premium content to basic cable. We couldn’t be more proud to continue telling heartwarming stories of love, inclusion, acceptance and diversity that pull on your emotions while putting a smile on your face.”

“Three months ago, I was heartbroken with the news of our beloved One Day At A Time’s cancellation. Today, I’m overwhelmed with joy to know the Alvarez family will live on,” said executive producer Norman Lear. “Thank you to my producing partner, Brent Miller, our incredibly talented co-showrunners, Mike Royce and Gloria Calderón Kellett, and of course, Sony, for never once giving up on the show, our actors or the possibility that a cable network could finally save a cancelled series that originated on a streaming service. And one last thank you to, Pop, for having the guts to be that first cable network. Even this I get to experience – at 96.”

“We are thrilled beyond belief to be making more One Day At A Time,” remarked executive producers and co-showrunners Gloria Calderón Kellett and Mike Royce. “This show has meant so much to so many, and we can’t wait to dive in with our amazing new partners Pop and CBS. And we’d especially like to thank all of the fans for their undying support, helping us turn #SaveODAAT into #MoreODAAT.”

“We are so honored to be associated with this exceptional series,” said Jeff Frost, Sony Pictures Television President. “It means so much to so many people. We were never willing to accept that the story of the Alvarez family might not continue and we undertook every effort to ensure that did not occur. We are so grateful to our new partners at Pop and CBS for believing in this series and working with us to bring it back. We are overjoyed to continue to work with the brilliant team of Gloria, Mike, Norman and Brent as well as this brilliantly talented cast.”

As part of the innovative deal to pick up the new season, ONE DAY AT A TIME will also be broadcast on the CBS Television Network later in 2020, following its run on Pop. CBS was the home of the original series that aired over 40 years ago.