Welcome to the cancel/renew scorecard for Hot Date TV show.
This is the most up-to-date place to find out whether Hot Date is cancelled or renewed. Is there Hot Date Season 3? Will there be a Season 3 of Hot Date? Get the latest Hot Date cancellation/renewal status below. 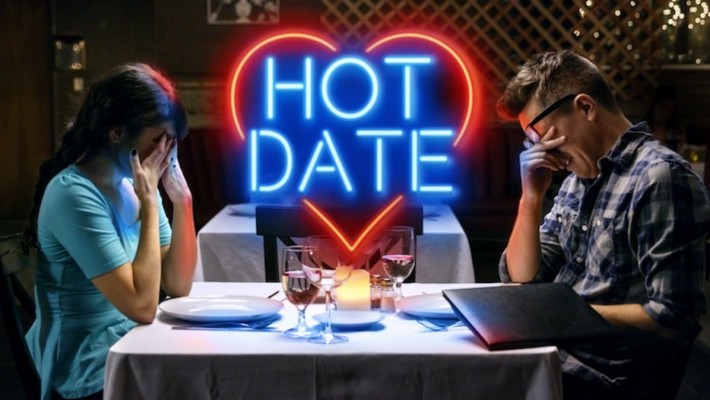 POP TAKES "HOT DATE" OUT FOR A SECOND SEASON

Pop TV announced that HOT DATE, the sketch comedy series spotlighting modern-day relationship dilemmas, will return for its second season on Friday, Sept. 20 at 10:00 and 10:30 PM, ET/PT. The half-hour, 10-episode series stars real-life married couple Emily Axford and Brian Murphy, two comedians who appear in the show as heightened versions of themselves trying to figure out this thing called love. In its second season, HOT DATE welcomes a swipe-right list of guest stars including Randall Park ("Always Be My Maybe," "Fresh Off the Boat"), Margaret Cho ("Drop Dead Diva," "30 Rock") and Thomas Lennon ("Reno 911," "The Odd Couple").

Executive produced by Will Arnett ("BoJack Horseman," "Arrested Development") and his Electric Avenue production company, Big Breakfast, a Propagate company ("Adam Ruins Everything") and Artists First, HOT DATE is inspired by the popular digital comedy "Hot Date," which has garnered over 100 million views to date on the CollegeHumor Originals YouTube channel.

In its second season, HOT DATE will tackle the awkwardness and unpredictability of friendships, love and adulthood with the help of new characters and familiar faces from the show's freshman season. Set in a new city, New Orleans, this season will focus on the many eccentricities "The Big Easy" has to offer while remaining centered on relational comedy. Emily and Murph are also planning a wedding and must attempt to navigate the various stresses that come with taking their relationship to the next level.

"HOT DATE skewers the complicated and sometimes absurd situations that people face in young adulthood, from marriage to building a career to having kids," said Justin Rosenblatt, Executive Vice President, Original Programming and Development, Pop TV. "This season finds Emily and Brian exploring these things and more as their relationship matures... even if they don't."

To make Friday a HOT DATE night in, Pop is scheduling romance and relationship-themed movie nights before each new episode premiere. Planned films include "Sixteen Candles," "Ghost," "Dirty Dancing," "Legally Blonde" and others.

"We're so thankful that Pop has allowed us to expand the world of our series in a second season," said Big Breakfast executive producer Luke Kelly-Clyne. "Emily and Murph are two of the most talented character performers in the game and, boy, do they have some new characters for us this time around. Fans of season one will enjoy seeing envelopes pushed."