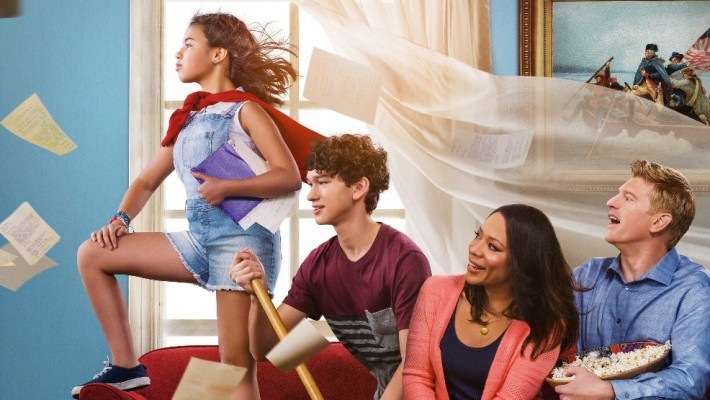 The Disney+ original series, "Diary of a Future President," from I Can and I Will Productions and CBS Television Studios, will premiere on Friday, January 17. Gina Rodriguez ("Jane the Virgin," "Someone Great") and Emily Gipson ("Someone Great") serve as executive producers on the 10-episode series, along with creator Ilana Peña ("Crazy Ex-Girlfriend"), on whose childhood the show was inspired, showrunner Robin Shorr ("The Carmichael Show") and Brad Silberling ("Jane the Virgin").

Told from the narration of her diary, "Diary of a Future President" follows Elena, a Cuban-American 12-year-old girl as she navigates the ups and downs of middle school and begins her journey to become the future president of the United States.

Formerly titled "Diary of a Female President," the series stars up-and-coming actor Tess Romero ("Blind Spot," "Alternatino") who portrays young Elena, an unabashed, ultra-observant, 12-year-old with a strong point of view, who walks through the world with purpose and confidence. Charlie Bushnell, who makes his acting debut in the series, plays Bobby, Elena's sweet and mischievous older brother. Selenis Leyva ("Orange Is the New Black," "Murphy Brown," "Maniac") stars as Gabi, Elena and Bobby's sharp and loving mom. Michael Weaver ("Here and Now," "The Real O'Neals," "Notes from the Underbelly") plays Sam, a lawyer at Gabi's firm who is in the beginnings of a relationship with her. Gina Rodriguez has a guest-starring role as adult Elena, the president of the United States. Rodriguez also directed the first episode of the series.

Disney+ is the dedicated streaming home for movies and shows from Disney, Pixar, Marvel, Star Wars, National Geographic, and more, together, for the first time. From The Walt Disney Company's Direct-to-Consumer and International segment, Disney+ is available on most internet-connected devices and offers commercial-free programming with a variety of original feature-length films, documentaries, live-action and animated series and short-form content including series "The Mandalorian," "High School Musical: The Musical: The Series," "The World According to Jeff Goldblum," and "Encore!" and films "Lady and the Tramp" and "Noelle." Alongside unprecedented access to Disney's incredible library of film and television entertainment and 30 seasons of "The Simpsons," the service is the exclusive streaming home for films released by The Walt Disney Studios in 2019 and beyond, including "Captain Marvel," "Avengers: Endgame," "Aladdin," "Toy Story 4," "The Lion King," "Maleficent: Mistress of Evil," "Frozen 2," and "Star Wars: The Rise of Skywalker." Visit DisneyPlus.com to subscribe and/or learn more about the service.