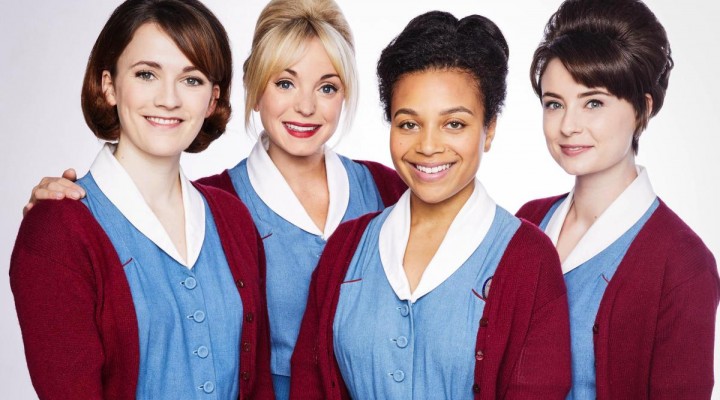 "As the unfamiliar terrain of the Hebrides stretches the team to the utmost at Christmas, their return to Poplar sees them braving a landscape that feels suddenly unfamiliar. Budgets are being cut, and hospitals reorganised. Terraced houses are being demolished, and traditional family structures torn apart. There are wrecking balls everywhere, and it’s up to Sister Julienne, and the midwives and medics of Nonnatus House, to help find a way out of the rubble. When they themselves come under threat, their job becomes even harder.

As the series unfolds, and 1965 rolls by, we see the team dealing with cases involving cancer, diptheria, dementia, fistula, and homelessness. They are faced with loneliness among the elderly, the traumas of an exhausted carer, and the defiant behaviour of a young and vulnerable prostitute. They deliver more babies born out of wedlock, care for a couple whose beloved infant dies, and support a brave and beautiful new mother who is blind. Meanwhile the Turner’s own family comes under threat, Lucille’s romance does not run smooth, and Sister Julienne is driven to take an extraordinary step.

In the interests of balance, I feel obliged to mention here that there is also a posse of visiting medical students, a fashion show in which Trixie wears the shortest miniskirt ever seen in Poplar, a Horticultural Extravaganza which tests Fred to the limit, and a firework display with a lot of toffee apples. Life, in some ways, has never been sweeter. But time and again, we see our beloved regulars patching over the gaps in the system with ingenuity, kindness and - that eternal, priceless, beautiful thing - their care.

Call The Midwife has often been referred to as a “love letter to the NHS”, and - hand on heart - I cannot dispute that. But it is written in praise of many other things besides. Yes, this is a drama that celebrates vaccination, antibiotics, life changing surgery, and gas and air in childbirth, all free at the point of delivery. It also flies the flag for various other miracles of the modern age, including tights, heated rollers and the electric Ladyshave. But above all else, Call The Midwife is a love letter to kindness, tolerance, and courage. To vocation, community and hope.

There are times when the world seems so chaotic, and its problems so unwieldy, that it is easy to forget the power of small things. Throughout series nine, Call The Midwife’s tough, uncompromising, often angry stories are threaded through with little redemptive beats of kindness and generosity. Because these are the things that stitch the whole of life together.

One way and another, the new season of Call The Midwife contains quite a few pieces of advice. For example...

Vaccinate your children.
If you think you are in labour, don’t drink castor oil
And there is always someone, or something you can hold just a little bit closer. It might be a friend, or a relative, or a memory. It might be an institution, like the NHS. Cherish it, even if it seems to make no difference in the scheme of things. As long as there is love involved, that is the thing that matters."

Mother Mildred and the Nonnatus House team go to the Outer Hebrides in response to a nursing shortage. Navigating the terrain, they strive to keep up with the needs of the locals.

As Christmas approaches, a bout of influenza sweeps through both Nonnatus House and the Turner family. When Mother Mildred declares that God is calling her to set up a branch house in the Outer Hebrides, it seems an ideal opportunity for the nuns and midwives to convalesce in the bracing, Scottish fresh air. As they recover, they will also be able to help the island where there is a nursing and doctor shortage. Much to Violet's frustration, Mother Mildred enlists Fred to drive them all.

Sister Monica Joan associates the Outer Hebrides with St Eustace's White Stag, a symbol of Christ and is thrilled at the idea of travelling there. However, she soon discovers to her annoyance that she is being left behind with Sister Hilda and Sister Frances.

Within a week Dr Turner, Shelagh, Mother Mildred, Trixie, Sister Julienne, Valerie, Lucille and Fred set off on their journey to the Outer Hebrides, where they are to stay in a freezing cold, converted church. As the team set about establishing an antenatal clinic and treating the local population, they must battle not only the weather and bleak terrain, but the suspicions of some of the islanders.

Meanwhile, in Poplar, Reggie has come home for Christmas and finds one of Violet's presents for him: the Guinness World's Records Book. Inspired by the triumphs of others, Reggie decides that he too will try to break a World record.

After a magical Christmas experience in the Hebrides featuring wild seas, stormy skies and some very disobedient sheep, we return to the harsher reality of city life in 1965.Made by Neal Street Productions for BBC One, the award-winning drama series, Call The Midwife, has completed filming for a Christmas Special to be broadcast this year and has begun filming a new series of eight episodes for 2020.

Created and written by Heidi Thomas, the upcoming series of Call The Midwife follows a triumphant eighth series which averaged nine million viewers per episode. The series explored many areas of medical and social history, including the impact of disability, adoption, abortion, cot death, Intersex representation, cervical smear tests and Sickle cell disease (which prompted a 46% increase of new blood donors registering).

This ninth series will uphold the show’s established reputation of compelling, sensitive and relevant storylines, with a tenth and eleventh series already commissioned, keeping the show on air until 2022.This year’s Christmas special will see the team take their work to the Outer Hebrides. Led by Mother Mildred, they embark on a trip to the remote yet idyllic Scottish island, where residents have a desperate need for nurses and midwives. Exposed to the elements, they operate in bleak conditions with limited access to water and electricity to help their patients, just in time to reconvene in Poplar for Christmas.Opening with the funeral of Winston Churchill in January 1965, series nine then continues with Nonnatus House entering a bold and innovative era. As the tower blocks multiply, and a new East End rises from the ashes of the old, society becomes more prosperous, but more complex. Our familiar team of medics and midwives face unexpected challenges as the population shifts, rules change, and old diseases come back to haunt them.

As we move into the mid 1960s the Nonnatus team face challenging new medical and social changes, with their customary winning combination of steely determination, empathy and love.”Heidi Thomas, Creator, Writer and Executive Producer, says: “After a magical Christmas experience in the Hebrides featuring wild seas, stormy skies and some very disobedient sheep, we return to the harsher reality of city life in 1965. Society is changing fast and in series nine we will see Nonnatus House shaken to its foundations.”Mona Qureshi, Commissioning Editor at BBC, says: “Call the Midwife really is such a special show, which consistently rewards us with challenging and compassionate stories that relate to modern audiences in all their diversity of experience. We are thrilled to be filming once again with the beloved team of midwives and nuns from Nonnatus House. Our audiences are in for another treat with the Christmas special and new series.”Call the Midwife is created and written by Heidi Thomas, Executive Producers are Pippa Harris, Heidi Thomas and Ann Tricklebank. Executive Producer for the BBC is Mona Qureshi with Ann Tricklebank as Producer. The Christmas special and episode one will be directed by Syd Macartney (Last Tango in Halifax, The Syndicate, A Love Divided). Call the Midwife is a Neal Street Production for BBC/PBS.

Here We Go Again Has Been cancelled With No Season 2

The Secret of Skinwalker Ranch is awaiting decision to be renewed or cancelled. View Latest Status for Season 3

The Reckoning Has Been cancelled With No Season 2

BNA is awaiting decision to be renewed or cancelled. View Latest Status for Season 2

Barkskins Has Been cancelled With No Season 2

The Pioneer Woman is Renewed for Season 28. It is Not Cancelled. View Latest Status for Season 29

Spiritpact Has Been cancelled With No Season 3

Secret City is awaiting decision to be renewed or cancelled. View Latest Status for Season 3

Overflow Has Been cancelled With No Season 2

Monarca Has Been cancelled With No Season 3

Lenox Hill is awaiting decision to be renewed or cancelled. View Latest Status for Season 2

Cannon Busters Has Been cancelled With No Season 2

Jailbirds Has Been cancelled With No Season 2

Cartel Crew is awaiting decision to be renewed or cancelled. View Latest Status for Season 3

The Final Table Has Been cancelled With No Season 2

Homecoming is awaiting decision to be renewed or cancelled. View Latest Status for Season 3

Hilda is Likely Renewed for Season 3. It is Not Cancelled. View Latest Status for Season 3

Deep State Has Been cancelled With No Season 3

The Dead Files is renewed for season 14. View Latest Status for Season 15

Cooper’s Treasure Has Been cancelled With No Season 3

The Paynes is At Risk of Getting Cancelled. View Latest Status for Season 3

Lip Sync Battle is Likely Renewed for Season 6. It is Not Cancelled. View Latest Status for Season 7

The Ranch Has Been cancelled With No Season 5