Welcome to the cancel/renew scorecard for Britannia TV show.
This is the most up-to-date place to find out whether Britannia is cancelled or renewed. Is there Britannia Season 4? Will there be a Season 4 of Britannia? Get the latest Britannia cancellation/renewal status below. 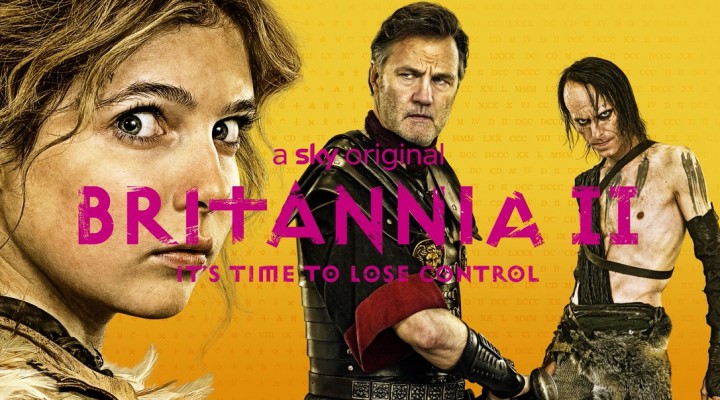 Original Run: January 18, 2018 –
Current Seasons: 3
Network(s): Amazon, Sky Atlantic
Genre: Period Drama, historical fantasy
Additional Notes: Britannia was filmed on location in Prague and Wales and will premiere all Season 1 episodes January 18, 2018 on Sky Atlantic in the UK and Ireland, ahead of its Amazon Prime Video release US in the same month. The show was renewed for Season 2 in advance of its series premiere. Season 2 premiered November 7, 2019 on Sky One in the UK. In December 2019, Sky Atlantic renewed Britannia for Season 3, to premiere in 2020

The drama is set in 43AD as the Roman Imperial Army – determined and terrified in equal measure - returns to crush the Celtic heart of Britannia - a mysterious land ruled by wild warrior women and powerful druids who can channel the powerful forces of the underworld.

Britannia series two launched in November to widespread praise with The Guardian calling it “…one of those shows you just have to imbibe, celebrating that it has the sheer cheek even to exist. Praise the capricious TV gods!” Whilst The Times said it’s “… ethereal and wonderfully odd” and “…...few shows embrace their own preposterousness quite as wonderfully as Jez Butterworth’s drama about the Roman conquest of Britain”.

In the first series of Britannia we followed the story of the Roman invasion led by General Aulus (David Morrissey) who sought to crush the Celtic heart of Britannia, a mysterious land led by warrior women and powerful Druids. In series two we joined General Aulus two years on from invading Britannia romanising willing Celt tribes with the help of Celtic Queen Amena (Annabel Scholey), and crushing those who tried to resist. The only form of hope for the Druids and Celts was Cait (Eleanor Worthington-Cox), a young girl being trained by outcast Druid Divis (played by Nikolaj Lie Kaas), to fulfil a prophecy that would save Britannia from the Romans. But an epic battle of wills divided the druids in the form of two Druid brothers – Veran and Harka (Mackenzie Crook) putting the prophecy in jeopardy.

Series three sees a radical transformation in Cait’s journey as the Chosen One with a decision that will tie her to the future of her war-torn people and their ravaged land. Aulus comes under pressure from a new and dark force - otherwise known as his wife, whilst Amena finds herself in a lethal Ménage à trois with both of them. Divis gets a new job which he despises, and Veran goes to the underworld and sees the future.

Cameron Roach, Director of Drama, Sky Studios said: “We are incredibly proud to be able to continue to grow the Britannia franchise bringing ‘Jez and the team’s unique and distinctive vision to life for a third series”.

Jez Butterworth added: We’re very excited to be continuing our mythic journey through Ancient Britain. This year was a particularly good vintage for mushrooms here in the West Country, so we strongly suggest you hold on to your hats.”

Sky has recently committed to more than double its investment in original drama, comedy and documentary through Sky Studios, the commissioning and production arm of Sky. Sky Studios brings to screen unique stories from the very best talent in Europe and is the creative home of Sky’s award-winning and much-loved Sky originals.

2019 was a record year for Sky originals with Chernobyl winning 10 Emmy Awards making it the most awarded British series of the year. Away from the screen, Sky secured a record BAFTA haul with seven awards.

All episodes of series one and two of Britannia are available to watch on demand on Sky and NOW TV. Britannia VR: Out of Your Mind, Sky VRs brand new experience available now on SteamVR and the Oculus store.

International distribution is being led by NBCUniversal Global Distribution.