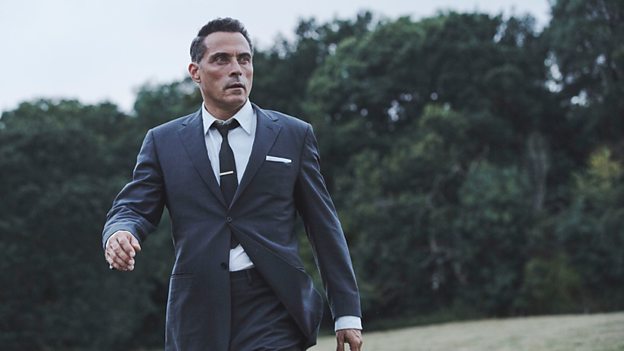 On March 13, 2020, Amazon Prime Video will premiere Agatha Christie's The Pale Horse in the US. The bewitching two-part mystery stars Emmy and BAFTA-nominated actor, Rufus Sewell (The Man in the High Castle). BAFTA-nominated writer, Sarah Phelps, adapted the acclaimed 1961 novel for television and served as executive producer.

When a murder investigation is launched into the death of a young woman, a mysterious list of names is discovered in her shoe, prompting an inquiry not only to find the killer but also to understand the list of names. One of those named is Mark Easterbrook (Rufus Sewell). He embarks on an investigation into how and why his name came to appear on the list; an investigation that leads him to The Pale Horse - the peculiar home of a trio of rumored witches in the beautiful village of Much Deeping. Past and present collide for Mark as he uncovers ties between his deceased first wife, Delphine (Georgina Campbell) and the witches. As more people named on the list are found dead, Mark starts to fear for his own life and sanity. Despite Mark's skepticism of the paranormal, he cannot help but be consumed by the increasingly strange and extraordinary things happening around him. Is this too the work of the witches of The Pale Horse, and does this mean he is next on their list? Or can he find a rational explanation and identify the killer before they catch up with him?

Agatha Christie's The Pale Horse is an Amazon Original in the US. The 2x60 series is produced for BBC One by Mammoth Screen, which is part of ITV Studios, and Agatha Christie Limited. The series is directed by Leonora Lonsdale and produced by Ado Yoshizaki Cassuto. BAFTA-nominated writer, Sarah Phelps, adapted the acclaimed 1961 novel for television, while also serving as executive producer. Executive producers also include Damien Timmer and Helen Ziegler for Mammoth Screen, James Prichard and Basi Akpabio for Agatha Christie Limited and Tommy Bulfin for BBC. Amazon Studios is the US co-production partner and Endeavor Content will handle sales in all territories internationally.