Home | Renewed TV Shows | Ratched is off to a hot start, with season 2 coming to Netflix early 2021
LnRiLWZpZWxkW2RhdGEtdG9vbHNldC1ibG9ja3MtZmllbGQ9Ijc5YzdiNTBlYjQ5MTcxZmVlMTBkMGJhYzU3YzQ1NjFjIl0geyB0ZXh0LWFsaWduOiBsZWZ0OyB9ICBAbWVkaWEgb25seSBzY3JlZW4gYW5kIChtYXgtd2lkdGg6IDc4MXB4KSB7ICAgfSBAbWVkaWEgb25seSBzY3JlZW4gYW5kIChtYXgtd2lkdGg6IDU5OXB4KSB7ICAgfSA=

Ratched is the top Summer release on Netflix

TVscorecards keeps track of several indicators to measure a series’ success and Ratched scored as the top performing series of the summer for Netflix, ahead of the super popular Cobra Kai, Cursed, Away and Warrior Nun. We estimate that over 30 million households will watch Ratched in the next 12 months (based on the data we’ve seen in September when it was released).

Ratched is the pre-quel to the popular movie “One Flew Over the Cuckoo’s Nest“. The series shows how Nurse Ratched became the manipulative and controlling villain in the 1975 movie featuring Jack Nicholson.

Ratched already has a season 2 order from Netflix with a total of 18 episodes already approved. Thankfully for those already enjoying Ratched, Netflix picked up two seasons from the start, with 10 more episodes on top of the 8 episodes alreayd released. Netflix has yet to announce a release date for season 2, but we believe it will come early 2021 considering that the new season was approved from the start.

Popularity in the first season

TVscorecards keeps track of hundreds of data points and popularity indicators to estimate the chances that a TV series will get renewed. Our data shows that Ratched lost a bit of momentum with its viewers between episodes, but the series remained very strong overall, topping the charts based on our data for Netflix shows. Season 2 is already approved by Netflix and we believe that new seasons could be coming depending on how the plot pans out in season 2. 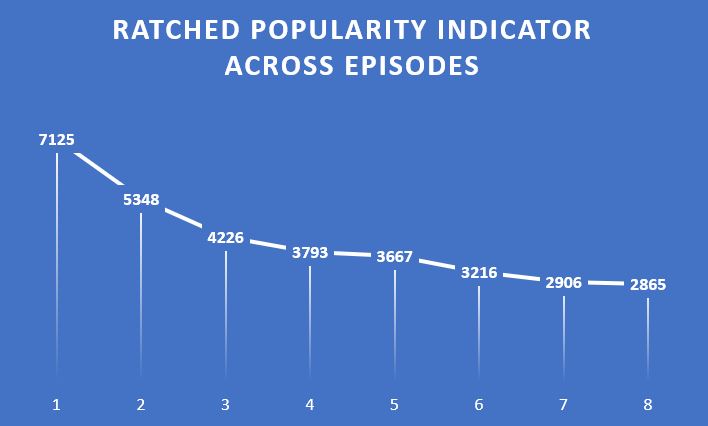 "Ratched" will focus on Nurse Ratchet, the lead nurse in the classic movie "One Flew Over the Cuckoo’s Nest" with Jack Nicholson (1975). Sarah Paulson who appeared in hit movie Bird Box (2018), will be playing Nurse Mildred Ratched.

Ratched is renewed for season 2. View Latest Status for Season 3