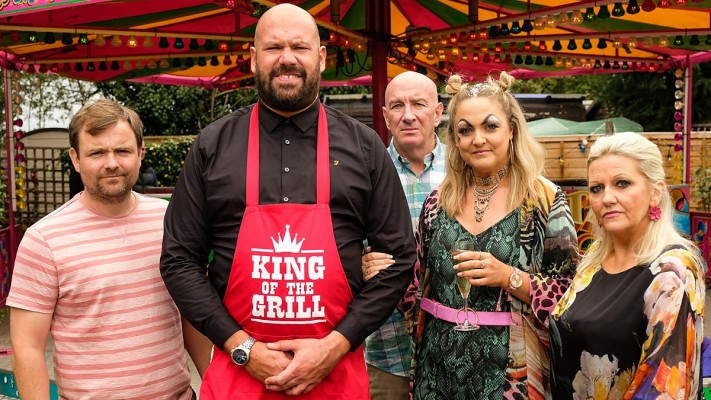 King Gary, made by Shiny Button, part of EndemolShine UK, follows Gary King (Tom Davis) and love-of-his life, Terri (Laura Checkley) as they bowl through family-life in suburbia. The first series saw the couple handle minor crises at home, at work, on the local Little-League football pitch and even on Deliveroo, as only a pair of major drama-queens can. Returning cast for series two include Simon Day (The Fast Show), Camille Coduri (Him & Her), Neil Maskell (Humans) and Romesh Ranganathan (The Misadventures Of Romesh Ranganathan).

King Gary
The Goes Wrong Show is a comedy series from the team behind The Play That Goes Wrong. Series one of the Mischief Screen and Big Talk show saw the Cornley Drama Society perform a number of disastrous half-hour playlets, ranging from horror to period romance, via legal drama and wartime thriller. The second series will again be written by Henry Lewis, Jonathan Sayer, and Henry Shields and sees them star alongside the returning cast from series one; Nancy Zamit, Charlie Russell, Bryony Corrigan, Greg Tannahill, Dave Hearn and Chris Leask.

As well as viewers watching on BBC One, both series have attracted over 2 million views each to date on BBC iPlayer.

The Goes Wrong Show
Shane Allen, Controller Comedy Commissioning, says: “These two shows are jam packed with colourful characters and family friendly jokes which embody the BBC’s unique commitment to cross generational comedy starring UK talent at the heart of them. The iPlayer figures have transformed comedy’s fortunes as the very healthy uplift in consolidated viewing and young audiences brings renewed faith in a genre where shows continue to be increasingly popular and discovered by new audiences over the months and years and even decades that follow.”

Writer and star of King Gary, Tom Davis, says: “Both James and I have been overwhelmed by the lovely response to the first series and the way people have taken the King family into their hearts. We are so humbled it resonated with so many and are both excited to be returning to Butterchurn Crescent. Lully stuff.”

Chris Bean, Director of the Cornley Drama Society, says: “We are delighted, if not a little surprised to have been commissioned to create a second series of The Goes Wrong Show. It’s no secret that we hit a few snags during production of the first series, but these snags were almost all caused by poor communication. To remedy that for the second series we are issuing all employees with five telephones.”

Transmission details for both new series – with both containing 6×30′ episodes – will be confirmed in due course.

Series one of King Gary and series one of The Goes Wrong Show are available to watch on BBC iPlayer now.

King Gary is a Shiny Button production for BBC One. The Executive producers are Andy Brereton, Tom Davis and James De Frond and the Producer is Rupert Majendie. King Gary was commissioned by Charlotte Moore, Director of BBC Content and Shane Allen, Controller Comedy Commissioning. The Commissioning Editor for the BBC is Alex Moody.

The series follows Gary King (Tom Davis) and love-of-his life, Terri (Laura Checkley) as they bowl through family-life in suburbia. Gary’s quest to impress the neighbours and fill dad, Big Gary’s big shoes, might be more successful if he wasn’t such a drama-queen but there’s always a lot of love around in Butterchurn Crescent.