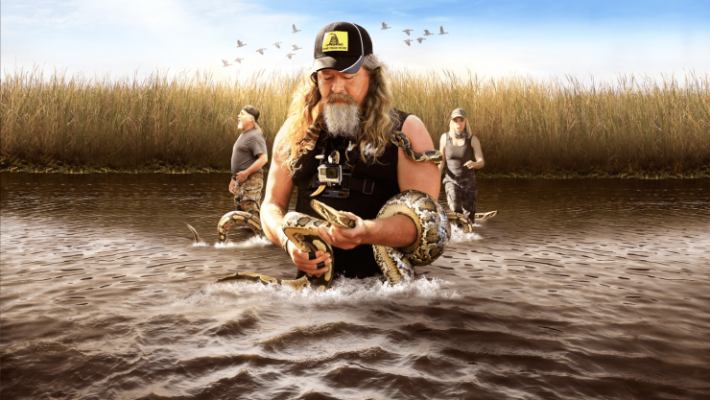 DUSTY CRUM DOUBLES DOWN ON HIS MISSION TO SAVE AMERICA’S ECOSYSTEM FROM INVASIVE PYTHONS IN NEW SEASON OF ‘GUARDIANS OF THE GLADES’ PREMIERING TUESDAY, JANUARY 7 ON DISCOVERY

Florida’s python problem is threatening to sweep north into the rest of America; but snake hunter Dusty Crum and his crew are ready to take on some of the biggest, deadliest snakes in the Everglades. During Florida’s ‘wet season’, the high-water acts as a “highway” for predators – including the Burmese Python – and it’s up to Dusty to catch them before they wipe out an entire generation of mammals. With new tools, new techniques and new areas of exploration, Dusty and his team are determined to stop Florida’s most destructive invasive species from taking over America. The brand-new season of GUARDIANS OF THE GLADES premieres Tuesday, January 7, at 10PM ET/PT on Discovery Channel.

This season the problem is worsening – with Pythons doubling in size and number – so Florida is doubling the bounty and Dusty and team are doubling down their efforts. Dusty is reinventing his tactics with everything from new technology to ingenious solutions as he charges barefoot into the Everglades to save the swamp he calls home – and catch the biggest python on record. His eclectic team of fellow snake hunters is back, including rookie Brittany, swamp guru Jay, wildlife expert Gary, and survivalist Tom. Each has a purpose and a common goal: to stop the area’s python takeover and save their beloved home and the diminishing wildlife who inhabit it.

In 1992, Hurricane Andrew introduced a foreign and invasive breeding population of giant constrictors known as Burmese Pythons to the Southern Florida wilderness. In the wake of the destructive storm, the state began a python bounty program in a desperate attempt to regain control over the Glades and to protect the fragile and dwindling animal populations.

Despite the danger of tracking down and capturing these deadly creatures, some of which can measure upwards of 18-feet in length, Dusty Crum and his gutsy crew understand the reward is worth the risk. Over the last decade, severe mammal declines have been directly linked to the pythons – including full-grown deer – which end up in the stomachs of these snakes.

Following Crum deep into the sawgrass swamps and mangroves of the Everglades and beyond, GUARDIANS OF THE GLADES spotlights the environmental crisis gripping the Florida wilderness and offers a thrilling up-close look at what happens when the hunters become the hunted – complete with harrowing wrestling matches in the treacherous swamps.

Florida has a snake problem - and snake hunter Dusty Crum has assembled the team to tackle it. The Everglades, considered the largest subtropical wilderness in the US, is a wetland paradise in the southern tip of Florida that is home to hundreds of unique species of wildlife. Once brimming with an abundance of life, today this swampy utopia and the native wildlife who call it home, is in grave danger. There is a new predator in town - the Burmese Python - which has already decimated more than 90 percent of certain mammal and bird species in parts of the Everglades. Now, one man has made it his life's calling - and business - to save the Glades from these foreign predators and total destruction.

Guardians of the Glades