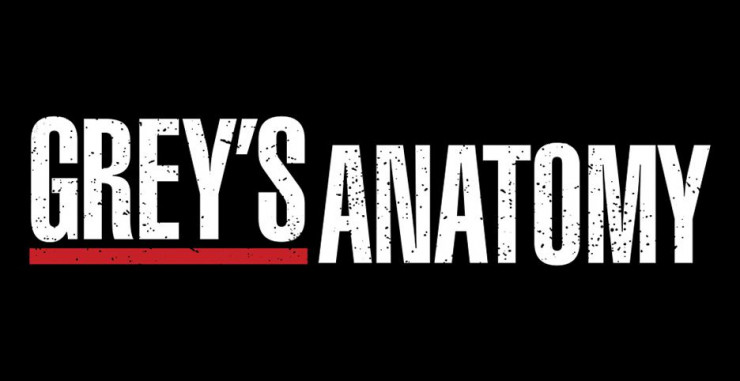 Official Status: We are still waiting for a final decision from ABC. Grey’s Anatomy is not yet cancelled or renewed for the 2021-2022 TV season.

Is Grey’s Anatomy coming to an end after 17 seasons?

Grey’s Anatomy has been a top performer since 2005. ABC renewed the show for season 17 which is currently being broadcasted, and it looked like the show would probably still be running for many years. However, we are seeing early signals that the series is losing steam. Everything needs to end at some point. Will season 17 be the end? In this post, we will be evaluating the reasons why we think season 17 might be the last and evaluate the chances for a Season 18 renewal.

Once a blockbuster show, Grey’s Anatomy has been witnessing a gradual decrease in viewership over the last few years. Currently, the viewership has fallen to less than 5 million viewers which is surprisingly low for a show that had 37 million viewers at one point. The viewership satisfaction score did fall below 80% for season 16 but this year it has been fairly strong. Despite a strong viewership satisfaction score of 85%, ABC executives have failed to make any headway with the show’s renewal for season 18. Considering the fast dip in viewership and ratings, the show might be at risk of being cancelled for season 18.

Renewal chances: 65% (At the risk of getting cancelled)

Check out our renewal scorecard below for season 18 of Grey’s Anatomy. 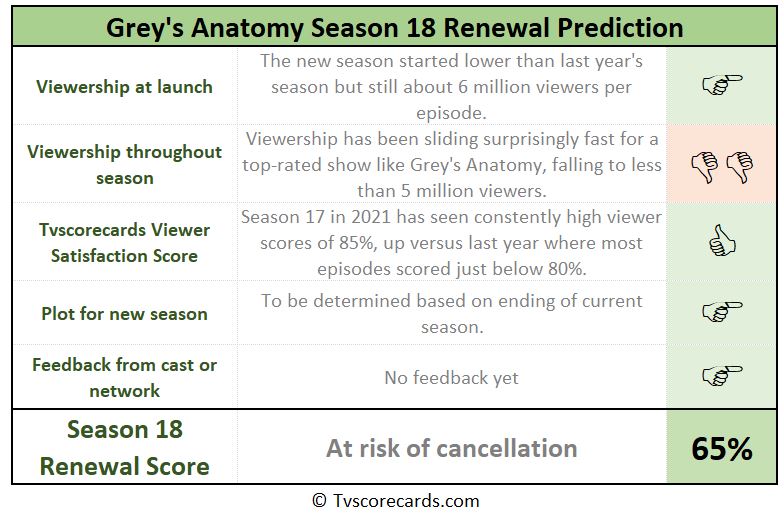 The fate of Grey’s Anatomy Season 18 is still up in the air. Even the showrunner Krista Vernoff doesn’t know the future of the show and awaits the broadcaster’s decision. Vernoff revealed that she is currently preparing for contingencies. She is planning two endings for season 17: a season finale and a “series finale”. This statement alone makes you doubt the renewal of the show. But there are other factors that put Grey’s Anatomy at risk for renewal.

Dip in viewership and ratings: The current season of the show received a 1.13 rating in the crucial 18-49 demographic along with 5 million viewers. When compared to the last season, it earned 12% lower viewership which doesn’t help the future of the show. The rating has also been lower than the last year. 5 million viewers might seem decent for a show but not so great for a blockbuster like Grey’s Anatomy. This drastic dip in viewership and rating might cause troubles for the show.

Failing against competitive shows: In 2020, Grey’s anatomy was comfortably leading the way at its time slot, ahead of other shows such as “Man with a Plan” (cancelled last year). However, in 2021, Grey’s Anatomy has fallen behind, competing unsuccessfully with Law & Order: Special Unit Investigation. It is even losing ratings against CBS’ MOM. This can’t be a good news for both the showrunner and the network.

Despite the dark clouds looming over the renewal talks, we still hope that there is more for us to see and know about our favorite medical show.

Here We Go Again Has Been cancelled With No Season 2

The Secret of Skinwalker Ranch is awaiting decision to be renewed or cancelled. View Latest Status for Season 3

The Reckoning is ended. View Latest Status for Season 2

BNA is awaiting decision to be renewed or cancelled. View Latest Status for Season 2

Barkskins is awaiting decision to be renewed or cancelled. View Latest Status for Season 2

The Pioneer Woman is Renewed for Season 28. It is Not Cancelled. View Latest Status for Season 29

Spiritpact Has Been cancelled With No Season 3

Secret City is awaiting decision to be renewed or cancelled. View Latest Status for Season 3

Overflow Has Been cancelled With No Season 2

Monarca Has Been cancelled With No Season 3

Lenox Hill is awaiting decision to be renewed or cancelled. View Latest Status for Season 2

Cannon Busters Has Been cancelled With No Season 2

Jailbirds Has Been cancelled With No Season 2

Cartel Crew is awaiting decision to be renewed or cancelled. View Latest Status for Season 3

The Final Table Has Been cancelled With No Season 2

Homecoming is awaiting decision to be renewed or cancelled. View Latest Status for Season 3

Hilda is Likely Renewed for Season 3. It is Not Cancelled. View Latest Status for Season 3

Deep State is in limbo. View Latest Status for Season 3

The Dead Files is renewed for season 14. View Latest Status for Season 15

Cooper’s Treasure Has Been cancelled With No Season 3

The Paynes is At Risk of Getting Cancelled. View Latest Status for Season 3

Lip Sync Battle is Likely Renewed for Season 6. It is Not Cancelled. View Latest Status for Season 7

The Ranch Has Been cancelled With No Season 5