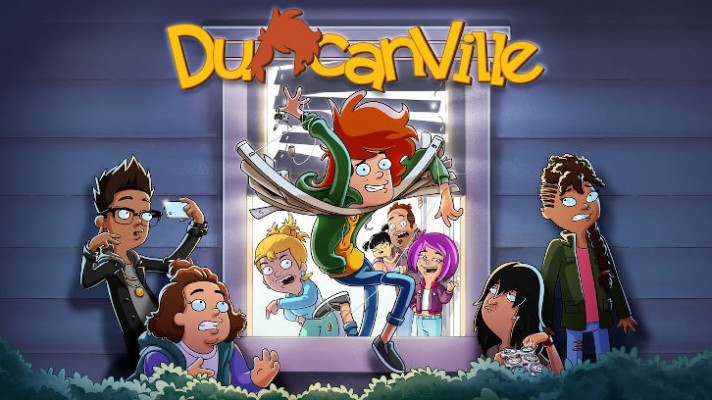 FOX Entertainment has ordered a second season of the new animated series DUNCANVILLE, to air during the 2021-2022 season. From Emmy Award and Golden Globe winner Amy Poehler and Emmy Award winners Mike and Julie Scully, DUNCANVILLE follows a spectacularly average 15-year-old boy with a rich fantasy life, and the people in his world.

“DUNCANVILLE is another great addition to our Sunday Animation Domination block,” said Michael Thorn, President of Entertainment, FOX Entertainment. “Amy, Mike and Julie have been fantastic partners, as have the teams at 20th and Universal Television. Our thanks also go out to the entire voice cast, including Ty, Ricki, Betsy, Yassir, Zach, Joy, Rashida and Wiz. Duncan may be an average teen. However, the show is anything but, and we can’t wait for a brand-new season of Harris family adventures.”

In the series, DUNCAN (Poehler) can see adulthood on the horizon: money, freedom, cars, girls…but the reality is more like: always being broke, driving with your mom sitting shotgun and babysitting your little sister. He’s not exceptional, but he has a wild imagination in which he’s never anything less than amazing. Poehler also voices Duncan’s mother, ANNIE, and Emmy Award winner Ty Burrell voices Duncan’s father, JACK. The series also features the voices of Emmy Award nominee Riki Lindhome, Betsy Sodaro, Yassir Lester and Zach Cherry, as well as guest voices Rashida Jones, Wiz Khalifa and Joy Osmanski.

In the encore episode “Fridgy,” airing Sunday, April 12 (8:30-9:00 PM ET/PT) on FOX, the family gets a new smart fridge that turns out to be too smart for Annie’s liking and she feels replaced. Jack and the kids see no harm in the fridge’s increasing invasions of their privacy, until they realize that the appliance company that sold them the refrigerator has questionable motives. Ana Gasteyer makes a guest-voice appearance.

From Golden Globe winner Amy Poehler (“Parks and Recreation,” “Saturday Night Live”) and Emmy Award winners Mike and Julie Scully (THE SIMPSONS, “The Carmichael Show,” (“Parks and Recreation”) comes DUNCANVILLE, an animated family comedy centered around a spectacularly average 15-year-old boy with a rich fantasy life, and the people in his world. Like most 15-year-olds, DUNCAN (Poehler) can see adulthood on the horizon: money, freedom, cars, girls… but the reality is more like: always being broke, driving with your mom sitting shotgun and babysitting your little sister. He’s not exceptional, but he has a rich fantasy life where he’s never anything less than amazing. Duncan’s mom, ANNIE (Poehler), a parking enforcement officer who dreams of someday being a detective, lives in perpetual fear that her teenage son is one bad decision from ruining his life and will do anything to stop him from doing so. Duncan’s father, JACK (Emmy Award winner Ty Burrell, “Modern Family”), a classic-rock-obsessed plumber who’s determined to be a better dad than the one he had, is constantly posting on Facebook – and annoyed that his kids won’t “friend” him. Duncan’s younger sisters are 12-year-old KIMBERLY (Emmy Award nominee Riki Lindhome, “Garfunkel and Oates: Trying to be Special,” “Another Period”), an awkward, emotional girl who can hold grudges forever; and six-year-old JING, who adores her older brother maybe a little too much and whose catchphrase is, “Watch me!,” followed by the world’s slowest cartwheel. Helping Duncan navigate adolescence are his friends, class clown BEX (Betsy Sodaro, “Another Period,” “Disjointed”); trendy influencer YANGZI (Yassir Lester, “Making History”); aspiring troubled youth WOLF; and his on-again, off-again crush, MIA (Rashida Jones, “Parks and Recreation,” “Angie Tribeca”), who never met a cause she wouldn’t dedicate her life to. The coolest guy in their school is MR. MITCH (Wiz Khalifa, “American Dad!,” “BoJack Horseman”), the universally loved teacher/guidance counselor, and occasional gym coach and school nurse, due to budget cuts. Animated by Bento Box Entertainment (BOB’S BURGERS), DUNCANVILLE is in the long tradition of FOX Sunday night animation, and has just started production on a line of over-priced, shoddily produced merchandise for the whole family.