Netflix has NOT yet renewed Cursed.
Official status: Waiting for approval.

While Cursed has not been officially blessed for a new season 2, we believe that there are high chances that it will be based on several factors. Our data analysts track many indicators to be able to predict if a show is going to be renewed, and compute a “TVscorecards.com Renewal score” based on this analysis. Cursed has a 74% renewal score.

The Netflix TV series turned the King Arthur legends on its head, shifting the focus to Nimue, future Lady of the Lake and wielder of a legendary Sword, and put a feminine twist to the story. Cursed features the journey of a young girl, Fey, in her struggles to survive when her kind is persecuted. 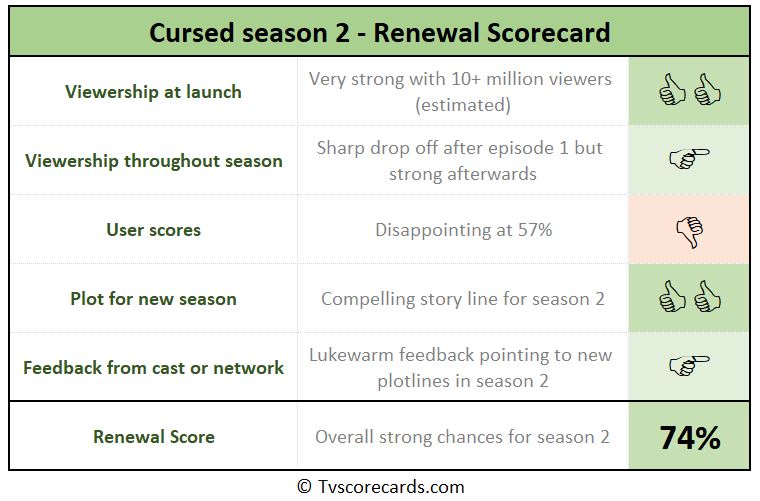 We believe that Cursed will be renewed based on the following:

Warning – spoilers about first season below.

A new perspective on Nimue’s destiny. First, did she survive her fall? In the first season, to protect her father, Nimue snatched his arrows and fell from a bridge into a river below. Despite his injuries, Merlin was able to use his powers to use Nimue’s sword and kill the Red Paladins who came to finish him off for good. But did Nimue survive? While we don’t see Nimue again for the rest of the episode after her fall in the river, her destiny remains in question, particularly since viewers don’t actually see her dead. If she did survive her fall, we expect to see that her powers and status will evolve in season 2, and the series will continue to follow her journey to become a legend on her own as the Lady of the Lake. After all, she is still destined to become the Lady of the Lake who entrusts Arthur with the kingdom’s fate.

Gawain may return. Gawain (Matt Stokoe) died in the season 1 finale, but Nimue used her powers to encase her friend in protective plants. This may give the character a new life.

Merlin’s new magical powers. After spending decades without his magic, Merlin ended up wielding the Sword of Power again after seeing Nimue’s fall of the bridge. As a result, he gained new magical powers and used them to defeat the Red Paladins. We will find out in season 2 whether he will use his regained powers to continue the fight against the Red Paladins. However, Merlin also swore he would never wield the sword again, but will he be able to part with it?

Reasons why Cursed’s renewal score is only 74%

The show received mixed reviews to say the least. TVscorecards also computes an audience score using several ratings and review scores online. The TVscorecards user score is only 57%, below other best-rated Drama and Mystery TV shows from 2020 that have already been renewed. As a result, we saw a big drop off of users between episode 1 & 2.

However, it seemed that despite these low initial ratings the first season did manage to sustain a large audience across episodes with loyal fans that did enjoy the series.

As a result, our  algorithm still predicts that Cursed will be renewed for season 2.

The young female rebel Nimue has mysterious powers and owns a legendary sword. She joins forces with mercenary Arthur on a mission to save her people and her father.

Cursed is awaiting decision to be renewed or cancelled. View status for season