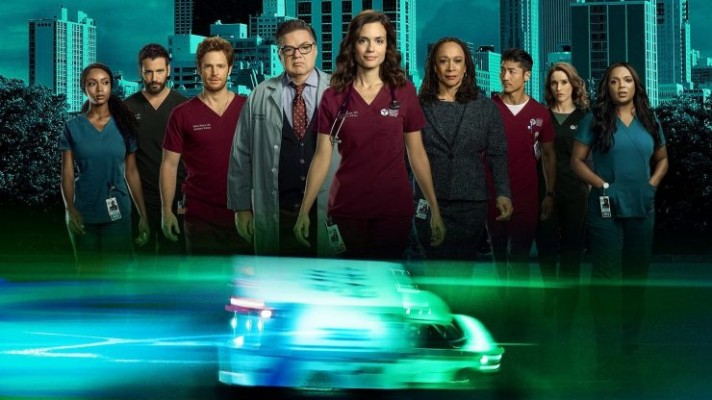 NBC has announced on 8/28 that Chicago Med will re-start on Wednesday November 11th 2020, along with Chicago Fire season 9 and Chicago PD season 8.

Good news for the fans. The third installment of Dick Wolf’s Chicago franchise, “Chicago Med” is renewed through season 8, which means we won’t have to worry about our favorite character’s fate for another three seasons. Considering the popularity of the show, the decision doesn’t come as a surprise. It scored 1.1 rating and 9.2 million viewers making it one of the peak-performers of the network.

Chicago Med follows the personal and professional lives of the doctors and nurses working at the fictional Gaffney Chicago Medical Center. While managing the emergency department, they want nothing more than to save the lives of their patients.

Season 5 finale reveals a new dynamic that Ethan and April might be sharing after their run-in with a dangerous situation. Meanwhile, Natalie and Crockett begin to understand each other better after Natalie uncovers a secret about him. Chicago Med’s yet another couple Will and Hannah, also grow closer much to Hannah’s surprise.

What will happen in Chicago Med season 6?

Season 6 is expected to follow Ethan and April as the cold war between them begins to thaw, and the possibility of a romantic relationship takes shape. The season will further expand on other pairs and the challenges they face. Crossovers within One Chicago will continue.

The suspension of production has made it difficult for the show to follow its usual release schedule. But there’s hope that it will premiere either by the end of 2020 or the start of 2021.

Emmy Award-winning executive producer Dick Wolf (“Law & Order” brand) delivers “Chicago Med” — the newest installment of the compelling “Chicago” franchise — an emotional thrill ride through the day-to-day chaos of the city’s newest state-of-the-art trauma center and into the lives of the courageous doctors, nurses and staff who hold it all together.

Bold and ever-capable trauma fellow Dr. Connor Rhodes (Colin Donnell, “Arrow”) is the newest doctor on staff at Chicago Med. Dr. Will Halstead (Nick Gehlfuss, “Shameless”), chief ER resident, is a trauma surgeon and brother of CPD’s Det. Jay Halstead (Jesse Lee Soffer). Halstead practiced medicine in New York for 10 years before returning to his Windy City roots and is the epitome of reliability, both in and out of the hospital. Dr. Daniel Charles (Oliver Platt, “The Big C”), Med’s Chief of Psychiatry, possesses remarkable insight into his patients and is off-the-charts intelligent in all subjects but his own personal life. Sharon Goodwin (S. Epatha Merkerson, “Law & Order”), the venerable head of Chicago Med, expects the very best from her people as she balances the tremendous pressures of running the city’s largest hospital, and always with a sense of humanity that allows her doctors to provide the very best care possible.

Dr. Natalie Manning (Torrey DeVitto, “The Vampire Diaries”) specializes in emergency pediatric medicine and is completely focused and dedicated to her patients, despite being in the third trimester of her pregnancy. Dr. Ethan Choi (Brian Tee, “Jurassic World”) found his calling in medicine while serving as a Navy flight surgeon. Currently on away rotation, he is a tireless yet impulsive doctor who is well-versed in infectious diseases. Fourth-year medical student Dr. Sarah Reese (Rachel DiPillo, “Jane the Virgin”) is a super proficient overachiever who has never struggled at anything academically, but who may soon find that, for the first time, she’s in over her head. April Sexton (Yaya DaCosta, “I Will Always Love You: The Whitney Houston Story”) is a smart, bold and intuitive ER nurse who is the lifeblood of the emergency room. She loves the action inside the hospital and is as loyal as they come.

Together, they will confront Chicago’s most critical medical cases and challenging ethical dilemmas with courage, compassion and state-of-the-art treatment. Inspired by ripped-from-the-headlines cases, “Chicago Med” will weave cutting-edge medicine with the personal drama that comes with working in such a high-intensity environment. Through it all, familiar faces from “Chicago Fire” and “Chicago P.D.” will intertwine with Chicago’s newest medical heroes. (NBC)