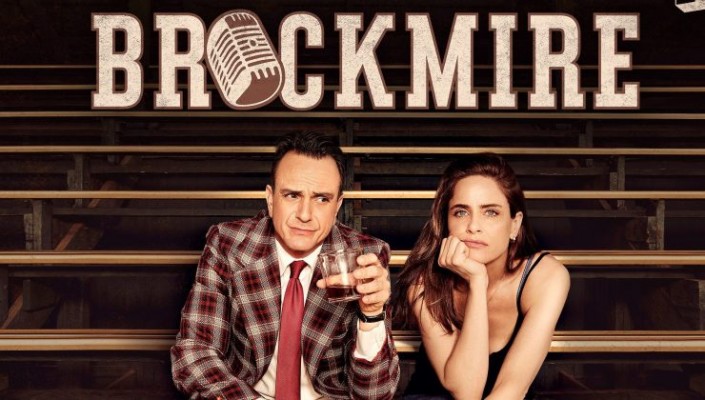 Get your fill of Brockmire while you can.

IFC has cancelled the comedy-drama after four seasons, TV Scorecards can confirm.

The previously-announced fourth season, premiering March 2020, will now be the last in the show’s run.

How do you feel about the cancellation of Brockmire? Should it have continued into Season 5?

Hank Azaria stars as Brockmire, a famed major league baseball announcer who suffers an embarrassing and very public meltdown live on the air after discovering his beloved wife’s serial infidelity. A decade later, Jim Brockmire decides to reclaim his career and love life in a small town, calling minor league baseball for the Morristown Frackers. Brockmire originally appeared as a viral short video on the award-winning comedy website Funny Or Die. The series is written by Joel Church-Cooper (Undateable) and will be directed by Tim Kirkby (Veep). It will be executive produced by Azaria, Church-Cooper, Kirkby and Funny Or Die’s Mike Farah and Joe Farrell.

IFC announced today that the fourth and final season of its critically-acclaimed series Brockmire starring Hank Azaria will premiere in March 2020. Returning for the series' final season are Amanda Peet, Tyrel Jackson Williams and Katie Finneran. Additionally, Reina Hardesty (The Flash) has joined the series' line-up for the final eight episodes.

Said Executive Producer and star Hank Azaria, "I really loved this season in several very right and a few very wrong ways. I hope you will too."

Jim Brockmire commented: "Making this show has been one of the top 7 joys of my life. Others include: that time by the swings with this guy Phil; my visit to the belt factory; my childhood days on the carrot farm; every time I finish a pancake challenge; that moment when you pass a porta potty and it really stinks then finally you get far enough away from it where you don't smell it anymore and just normal air seems like sweet, sweet perfume to you."

IFC Executive Director Blake Callaway added, "From the beginning, Brockmire was conceived as a four-season story, and we are so proud to see it written and produced to its creative conclusion. Blazers off to the amazing crew, our fantastic partners at Funny Or Die, and the incredible cast, especially the incomparable Hank Azaria, who lives, sleeps and breaths Jim Brockmire, as well as Amanda Peet who makes an indelible contribution to the show as Jules, and Tyrel Jackson-Williams who completely shines as Charles. Fans and critics alike will love watching how the story ends."

"It's hard to believe that Jim Brockmire first entered our lives a decade ago in what is now regarded as one of Funny Or Die's all-time classic videos," said Mike Farah, CEO of Funny Or Die and Executive Producer of Brockmire. "It's been an amazing journey and honor watching Hank bring so much comedy, empathy and emotion to the character, and we are excited for fans of the show to see the final and most ambitious season of Brockmire. I want to thank the entire Brockmire team, and especially IFC, for always championing our show."

Brockmire follows Jim Brockmire (Azaria), a famed major league baseball announcer who suffered a notorious public breakdown after stumbling upon his wife's (Finneran) infidelity - a breakdown so bad that "Brutal Brockmire" became a viral internet meme. Season 1 began a decade later, as Brockmire looked to reclaim his career and reputation by calling games for the Morristown Frackers, an underdog minor league baseball team. Despite finding happiness in Morristown alongside his girlfriend/team owner Jules (Peet), Season 2 began with a newly-single Brockmire calling games in New Orleans and living with his co-dependent friend Charles (Williams)... while fully indulging in the city's booze-riddled sins. When a drug-fueled night of partying with a stranger ends with a near-death experience, Brockmire realizes it's time to get sober once and for all. Season 3 took place one year after a stint in rehab, with Brockmire doing play-by-play in the radio booth for the major leagues in central Florida while maintaining his brazen and narcissistic tendencies, despite actually being on the wagon.

Brockmire Seasons 1-3 are currently available to watch on iTunes, Google Play, Amazon and XBOX. Season 1 and 2 are also available on Hulu, with Season 3 joining Wednesday, January 1, 2020.