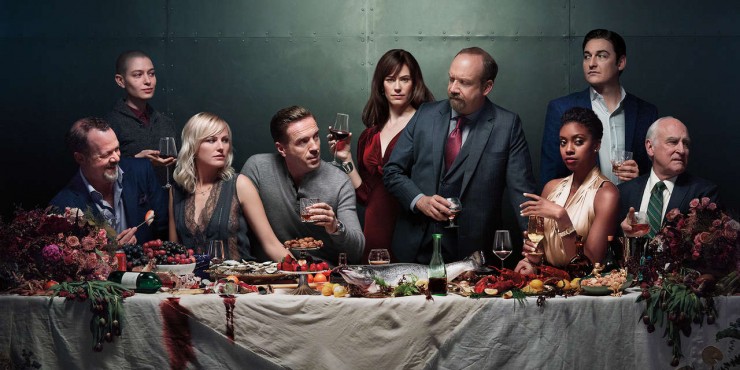 The Billions keep coming. The very successful hit drama series on Showtime will go all the way to the end of 2021. With an estimated 25+ million viewers and a stellar 87% TVscorecards score for user satisfactions, it is obvious that the world needs more Billions.

Hit Drama “Billions” is renewed for season 6 on Showtime

On October 1st 2020, Showtime sent out a press release announcing that season five of BILLIONS will return with five new episodes in 2021, with season six to follow. In season five, Bobby Axelrod (Lewis) and Chuck Rhoades (Giamatti) continue their legendary rivalry but new enemies appear. Social impact pioneer Mike Prince turns out to be a real threat to Axe, and Chuck ends up fighting with a tenacious district attorney (Roma Maffia). Taylor Mason is forced back to Axe Capital, where Taylor must fight to protect employees and assets. Wendy Rhoades (Maggie Siff) reevaluates her loyalties and forges surprising new alliances that put her at odds with both Chuck and Axe. Season five guest star Julianna Margulies (The Good Wife) plays Catherine Brant, an Ivy League sociology professor and bestselling author.

Season 6 will likely release between May 2021 and September 2021

No date has been officially announced yet. Season 5 is not done yet as of this writing, with five new episodes scheduled to appear early 2021. We expect that season 6 will follow at the earliest in May 2021 (assuming the studios were able to catch up with production delays due to the pandemic) or most likely in Summer or Fall 2021. We will update this post as soon as we find out more.

The series is a hit on Showtime

Billions is one of the highest-rated shows based on our TVscorecards indicator, which compiles several data points to summarize a TV show’s popularity. You can view other top-rated TV shows here. We estimate that overall Billions has been watched by over 15 million viewers.

On October 1st, 2020, Showtime has announced it has ordered season 6 of hit drama "Billions".

Season 5 of BILLIONS will return with five new episodes in 2021, with season six to follow.

Starring Oscar® nominee and Emmy® and Golden Globe® winner Paul Giamatti and Emmy and Golden Globe winner Damian Lewis, BILLIONS is one of the network’s top drama series, with season three averaging five million weekly viewers across platforms. The first three seasons of BILLIONS are available on SHOWTIME on-air, on demand and over the internet.

When everyone is out for revenge, no one is safe. This is never more true than in season four of BILLIONS. Bobby Axelrod (Lewis) and Chuck Rhoades (Giamatti), former enemies, and Wendy Rhoades (Maggie Siff), the chief counselor to each, have come together to form an uneasy but highly effective alliance, aimed at the eradication of all their rivals, including Grigor Andolov (guest star John Malkovich), Taylor Mason (Asia Kate Dillon), Brian Connerty (Toby Leonard Moore) and Waylon "Jock" Jeffcoat (guest star Clancy Brown). Ambition and betrayal have long been at the heart of BILLIONS, and this season all the characters find out exactly how high a price they'll have to pay to satisfy those needs. The series also stars David Costabile, Condola Rashad, Kelly AuCoin, Jeffrey DeMunn and Malin Akerman, along with new guest stars Samantha Mathis, Kevin Pollak, Jade Eshete and Nina Arianda.

Billions is renewed for season 6. View Latest Status for Season 7