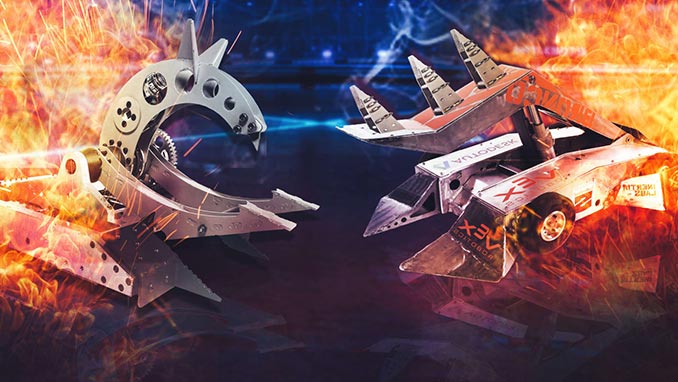 An All-New Metal Crunching Season Premieres Friday, May 15 at 8 PM ET/PT on Discovery

(LOS ANGELES) – The epic, robot-fighting series BattleBots returns bigger than ever before – with an unprecedented 50 hours of programming on Discovery. Competitors from around the world will face off to prove who is the ultimate robot-building genius when an all-new season of BattleBots returns on Friday, May 15 at 8 PM ET/PT on Discovery Channel.

This season, BattleBots will host the largest international field in its 20-year history, as over 80 robots from a dozen countries will attempt to win the sport's most prestigious prize, The Giant Nut.

This year's builders will stop at nothing to take down the competition with custom-made weaponry like metal-scorching flamethrowers, hydraulic flippers and spinning blades with speeds reaching more than 200 mph. Fans will also witness never-seen-before technology, such as robots that can walk on legs and new designs to withstand even bigger blows.

Each match consists of two remote-controlled robots competing in a single, three-minute round with the goal to destroy or disable their opponent. If there is no knockout during the battle, a panel of judges will declare a victor. But there can only be one ultimate champion in the world of Robot Combat Sports.

"BattleBots is the perfect combination of engineering wit, cutting-edge design and adrenaline pumping entertainment," said Scott Lewers, EVP Multiplatform Programming Discovery Factual & Head of Content, Science. "It's the perfect show for the entire family to watch together. We're incredibly excited to work with the teams at BattleBots and Whalerock to bring it back bigger than ever before. Fans will be blown away by what they see."

"For our fans there are two times of year: Robot Fighting Season, and waiting for Robot Fighting Season," said Chris Cowan, Executive Producer, Whalerock Industries. "We couldn't be prouder that our partner Discovery has dramatically increased our programming block to satisfy our legions of dedicated fans. The quest to crown this year's most dominant combat robot is on!"

"This massive order of 50 new hours is an incredible achievement for a 20-year-old brand; we're thrilled, and so are our millions of fans worldwide. Let the bot battles begin!" said Trey Roski, Co-Creator and Executive Producer for BattleBots Inc.

Each episode will highlight the design and build of the competing robots as well as the team behind them. Most incredible of all, every robot is homemade and constructed from a variety of materials with custom-built weaponry to destroy the competition. The teams come from all types of backgrounds - from families to university students and everything in between. But one thing is certain -- they all experience the tension as they vie for a coveted spot in the 32-team, single elimination World Champion Tournament.

Sportscaster Chris Rose and UFC fighter Kenny Florian will be back once again to provide play-by-play commentary, while Faruq Tauheed will be back as the ring announcer. Production is set to begin on April 3, in Long Beach, Calif.