Home | Cancelled TV Shows | In surprising move, Netflix cancels Away with no plans for season 2
LnRiLWZpZWxkW2RhdGEtdG9vbHNldC1ibG9ja3MtZmllbGQ9Ijc5YzdiNTBlYjQ5MTcxZmVlMTBkMGJhYzU3YzQ1NjFjIl0geyB0ZXh0LWFsaWduOiBsZWZ0OyB9ICBAbWVkaWEgb25seSBzY3JlZW4gYW5kIChtYXgtd2lkdGg6IDc4MXB4KSB7ICAgfSBAbWVkaWEgb25seSBzY3JlZW4gYW5kIChtYXgtd2lkdGg6IDU5OXB4KSB7ICAgfSA= 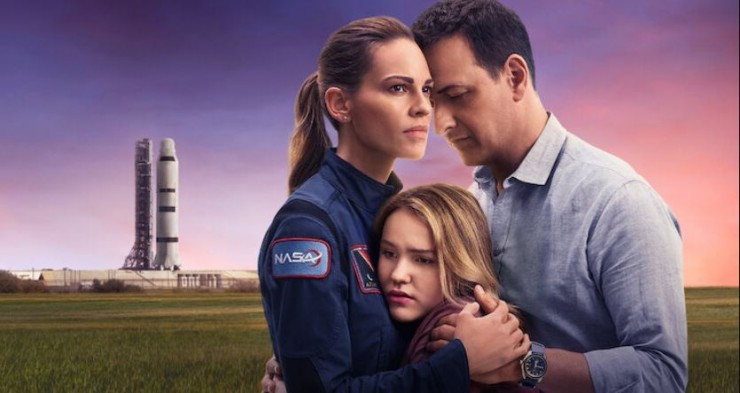 Netflix has cancelled Away season 2. Despite a hot start early september, AWAY eventually lost mementum with its viewers and viewer scores were below expectations with a TVscorecards score at only 66%.

Why has AWAY been cancelled?

AWAY did not reach 90% renewal chances despite its hot start and plans to expand to several seasons from the start. The reasons are:

1. Retention is below expectations. The show was a big hit early on, but it did not manage to retain viewers from episodes to episodes, in particular from episode 1 to episode 4.

2. user scores are below expectations. Season 1 only scored 66%, meaning that despite high viewership, a lot of viewers did not enjoy the season very much (Which explains the retention drop-off above).

Away season 2 will likely be announced by Netflix by end of October or early November 2020. The new Netflix series is off to an excellent start based on our indicators and we believe there is an 80% chance it will be renewed for a new season 2 (see renewal scorecard below). Away tells the story of Commander Emma Green who leaves her family behind to lead a team of astronauts on a dangerous mission to Mars.

The scorecard below summarizes our data analysis and research to predict the changes that Away will be renewed by Netflix for a new season. Overall, there are high changes for season 2 but the high budget of the series and relatively low user scores in the first couple of weeks at launch could be reasons to cancel the series without a season 2. 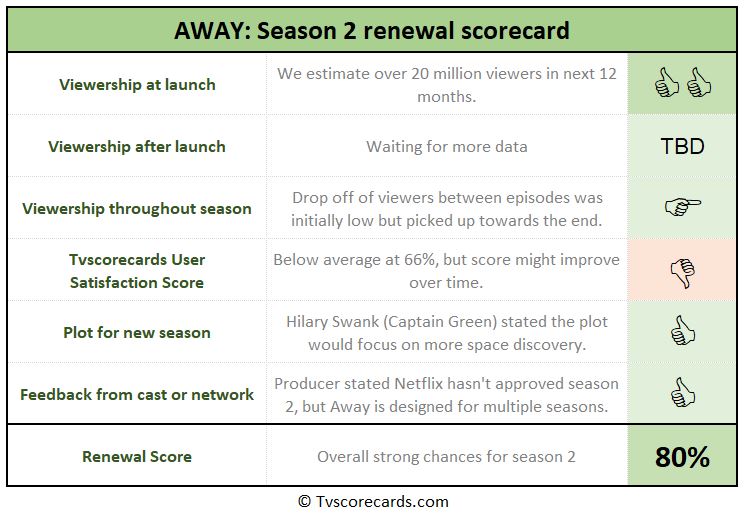 Why we though Away would be renewed for season 2

Below are the reasons we believe the series will be renewed for a season 2:

1. High viewership. Netflix doesn’t disclose viewership numbers for most shows. However, based on our data tracking and the numbers we’ve seen in the first couple of weeks, we estimate that the show will get over 20 million viewers in the next twelve months.

Do you want to find out if your favorite TV show has been renewed? Check out our Netflix scorecard and recent Netflix renewal news on TVscorecards.com.

Netflix has announced that AWAY has been cancelled and there will not be a season 2. This announcement comes as a surprise as AWAY was off to a blockbuster start, but did lose momentum after a couple of weeks. The user scores were also below expectations with a TVscorecards score of only 66%, leaving some fans disappointed.

AWAY followed Emma Green, an American astronaut who must leave her husband and teenage daughter behind in order to command an international space crew embarking upon a treacherous, year-long mission.

Away Has Been cancelled With No Season 2